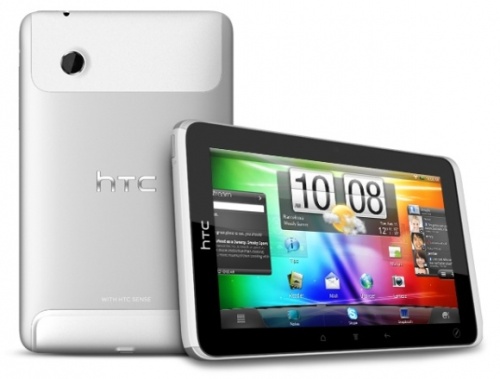 HTC has finally gotten around to introducing that 7 inch Android tablet that’s we’ve been expecting for the past year or so. It’s called the HTC Flyer and it’s an interesting little guy that stands out from the crowd in a few unusual ways:

The tablet also looks pretty slick, with an aluminum case. Spec-wise, you’re looking at a 7 inch, 1024 x 600 pixel display, a 1.5 GHz single-core CPU, and Google Android 2.4, which is apparently a new version of Gingerbread with some Honeycomb-like features baked in under the hood.

HTC has packed a 1.3MP camera onto the front of the tablet and a 5MP camera on the back. The Flyer has 1GB of RAM, 32GB of storage, a WCDMA/HSPA+ mobile broadband modem, GPS, G-Sensor, ambient light sensor, 802.11n WiFi, Bluetoth 3.0, and a 4000mAh battery, which unfortunately is only good for 4 hours of non-stop video playback, although you’ll probably get more run time with less processor/graphics intensive tasks.

The company says the reason the tablet is shipping with Gingerbread instead of Android 3.0 Honeycomb is because HTC hasn’t had time to develop Sense software for Honeycomb yet. That’s a bit disappointing. While HTC Sense clearly has some fans, it’s unfortunate to get this kind of confirmation that HTC’s commitment to its own software really does slow down adoption of the latest Android updates from Google.

You can check out HTC’s teaser video after the break, as well as demos from the Mobile World Congress show floor from MobileCrunch and jkkmobile.

via SlashGear, Engadget, and Gizmodo