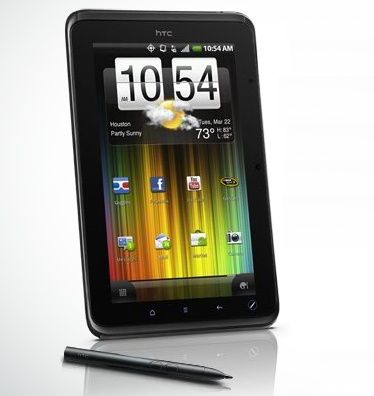 Sprint is about to become the first US carrier to offer a version of the HTC Flyer 7 inch Android tablet. The company will sell the Flyer under the HTC EVO View 4G name, and as the name suggests, the tablet will support Sprint’s 4G WiMAX mobile broadband network.

The EVO View 4G will be available from Spring starting June 24th, and it will cost $399.99 when you sign up for a 2-year contract. You can pre-order now if you buy a $50 Spring gift card at any participating store, and Sprint Premier customers will get a chance to place an order 3 days earlier on June 21st.

The wireless carrier is also throwing in the Flyer’s digital pen for free for a limited time when you sign a contract. It will normally run $79.99. Sprint will charge for additional services such as GPS navigation ($10 per month or $2.99 per day) and mobile hotspot access ($29.99 per month)

The tablet features a 1.5 GHz single core Qualcomm Snapdragon processor and a 7 inch, 1024 x 600 pixel capacitive touchscreen display. It runs Google Android 2.3 Gingerbread and Sprint says a software update for Android 3.0 Honeycomb will come “when it is available for 7-inch tablets.”

There are at least two things wrong with that statement though. First, it’s unlikely that HTC, Sprint, or Google would push Android 3.0 to this tablet, when Android 3.1 is already available. Second, we’ve already seen 7 inch tablets with Honeycomb. It’s more likely that HTC is waiting until it’s had time to customize Honeycomb with HTC Sense software.

Sprint will also wireless data plans starting at $34.99 per month for unlimited 4G data and 3GB of 3G data per month.

If you just want to get your hands on an HTC Flyer and have no interest in the mobile broadband capabilities, it sounds like the WiFi-only model might be a better option. It’s available from Best Buy for $499.99

. But if you’re cool with spending $35 per month for internet access on the go (or nearly doubling that price for mobile hotspot use), Sprint has you covered.