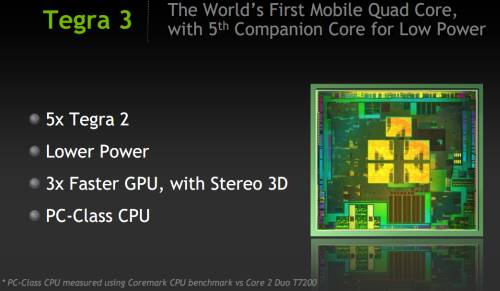 Asus is the only company that’s officially announced plans to launch an Android tablet with NVIDIA’s new Tegra 3 quad-core processor. The Asus Eee Pad Transformer Prime tablet is scheduled to start shipping in December. But it looks like device makers are lining up left and right to ride the Tegra 3 chain.

This morning we found evidence that Lenovo and Acer are both working on tablets using NVIDIA’s new mobile processor. Now Commercial Times reports that HTC will launch its first quad-core tablet a the Mobile World Congress trade show in February.

While software details are scarce, I suspect the devices will ship with Google Android 4.0 Ice Cream Sandwich. Device makers such as HTC, Samsung, and Dell usually need a few months to work with Android source code once it’s released before they’re ready to ship products using the latest operating system.

Since Google hasn’t yet released the source code for Android 4.0, Asus plans to ship the Transformer Prime with Android 3.2 Honeycomb and offer an Ice Cream Sandwich software update later. Other companies appear to be waiting to launch their next-generation devices with the new operating system.