Most PC-based virtual reality systems released to date are aimed at gamers. But HP figures that means there’s an untapped market for VR-ready PCs aimed at enterprise customers.

So the company is adding VR capabilities to some of its business class computers… and launching a business-class version of the HP Omen X gaming-PC-in-a-backpack.

The new model is called the HP Z VR Backpack, and it’s basically a compact workstation PC  that you can use either when it’s harnessed to your back and hooked up to a VR headset, or when it’s sitting in a dock so that it works like a desktop computer. 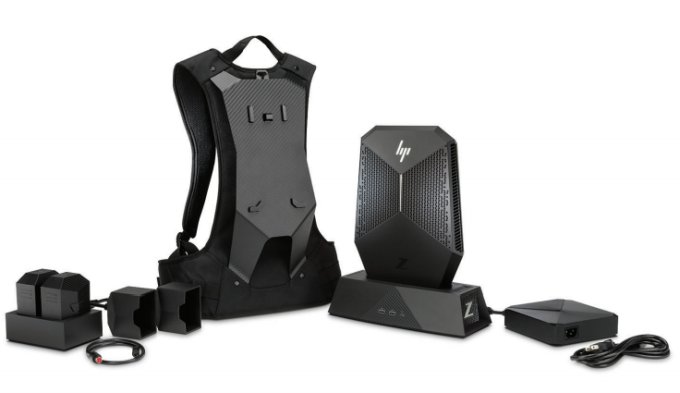 The system features an Intel Core i7-7820HQ processor with vPro, NVIDIA Quadro P5200 graphics with 16GB of video memory, and configurable memory and storage options (the system supports up to 32GB of DDR4-2400 RAM and up to 1TB of storage).

It supports the HTC Vive, Oculus Rift, and any other PC-based virtual reality headset, and has a few other business-friendly features including a hardware TPM 2.0 module, Windows 10 Pro support, and a commercial BIOS with support for features like wake on LAN).

HP says the computer and backpack harness weigh about 10 pounds combined, making the system relatively comfortable to wear as a backpack. It’s also designed to let the air flow away from your back to keep you from getting sweaty while wearing a hot piece of machinery.

The system only gets around 60-90 minutes of battery life when you’re using it to power a virtual reality experience. But it runs on two battery packs, which are hot swappable and which can charge to about 80 percent in about an hour. That means you should be able to keep the computer running all day without shutting it down to change or charge the batteries. Just leave one battery in the PC while changing out the other one.

Of course, individual gamers probably don’t need all-day battery life. A few hours at a time will probably do. But if you’re using a system like this in a commercial environment where it’s functioning as a virtual showcase for customers or trade show attendees, for example, the ability to keep going all day while untethered from a wall socket can come in handy.

All that power doesn’t come cheap though: the HP Z R Backpack is expected to sell for $3299 and up when it goes on sale in late September, 2017.

HP acknowledges that a wearable PC is only one way to make virtual reality experiences more comfortable. Another is to add wireless tethering capabilities. But the company says there’s still a need for both options for the foreseeble future, since wireless connections might not work as well with multiple users or might not be able to support the ever-increasing frame rates and display resolutions coming to VR headsets.

In addition to launching a new business-class VR backpack, HP is partnering with HTC to offer a new Vive business edition headset. It’s basically the same as the standard HTC Vive, but it comes with a 1-year commercial warranty, will be available as a bundle with HP’s VR-ready business computers, and includes headphones.