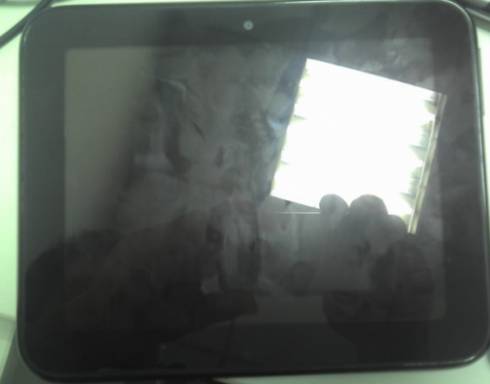 Shortly before giving up on webOS tablets altogether, HP had been planning on launching a 7 inch tablet to flesh out its lineup. While the 9.7 inch HP TouchPad tablet had a brief fling with reality, the 7 inch tablet, code-named “Opal” was reportedly almost ready to go when HP pulled the plug.

Now a member of a Chinese forum has posted a picture of a prototype. It looks almost exactly like the 9.7 tablet, except it’s smaller and has a webcam positioned for use in landscape mode instead of portrait. There’s also a rear camera — something that’s missing from the larger model.

The little tablet also features 3G mobile broadband and NFC (Near Field Communications) technology, although it’s not clear if the Opal Tablet would have retained those features had it come to market. While the 9.7 inch HP TouchPad could have easily been a 3G or 4G tablet, the only models that were ever released to the public were WiFi-only tablets.

The rest of the specs are reportedly pretty similar as well, with the Opal tablet featuring a 1024 x 768 pixel display, a 1.5 GHz Qualcomm APQ8060 Snapdragon processor, and 16GB of storage.

Unfortunately this little guy will likely never see the light of day in the US.