HP is giving its Stream line of low-cost laptops an upgrade and a minor makeover. The new HP Stream 11 and Stream 13 are a little thinner and a little lighter than the models HP released in 2014.

The bigger news is under the hood, where HP has upgraded the laptops from Bay Trail to Braswell processors. That should bring modest performance improvements, and HP says the new laptops should also get longer battery life than their predecessors.

One thing that hasn’t changed? These laptops are affordable: the HP Stream 11 is priced at $200, and the HP Stream 13 is $230. They should both be available starting October 18th. 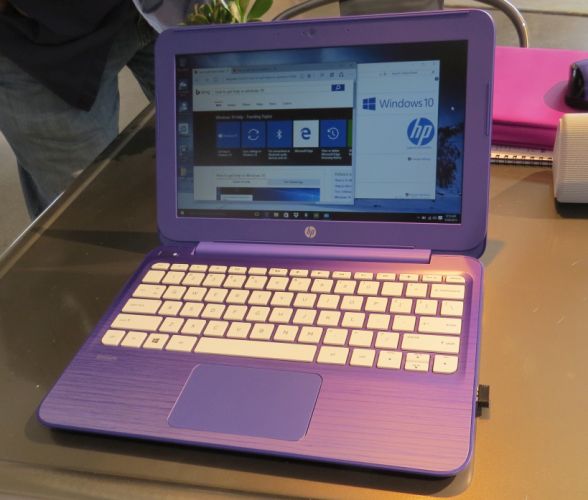 The Stream 13 has a 13 inch, 1366 x 768 pixel display, up to 8.5 hours of battery life, and a case that measures about 0.8 inches thick and which weighs about 3.4 pounds. HP will also offer an optional touchscreen for the Stream 13. There’s no touch panel option for the smaller Stream 11 laptop.

Both models are fanless laptops that are available in blue or purple, and there’s also a silver option for the 11.6 inch model.

The laptops feature Intel Celeron N3050 dual-core Braswell processors, 2GB of RAM, and 32GB of storage. They have one USB 3.0 port and one SB 2.0 port, HDMI ports, and microSD card readers.

HP is also introducing a new Stream 11 Pro G2 notebook aimed at the education market. That model is available with up to 4GB of RAM and up to 64GB of storage and prices start at $249. It should be available starting October 12th.