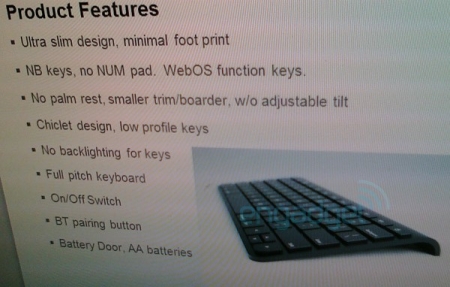 In a not-particularly-shocking move, it looks like HP plans to offer a Bluetooth keyboard accessory for the company’s upcoming webOS tablet. Engadget has received a leaked photo of the keyboard along with a little bit of information letting us know that the keyboard will have some special webOS function keys, no number pad, a chiclet keyboard layout, and keys which aren’t backlit. The keyboard will apparently run on AA batteries.

The tipster also says that the tablet is code-named “Topaz,” but that doesn’t really mean much. HP will likely give the device a different name before releasing it to the public. One of the last names we’d heard was PalmPad, but I kind of hope the company comes up with something better than that.