The HP Pavilion x2 10 is a Windows tablet with a 10 inch display and a detachable keyboard. A model with an Intel Bay Trail processor was introduced in late 2014. Now HP is showing off a 2nd-gen model with an Intel Cherry Trail chip and a revised design. 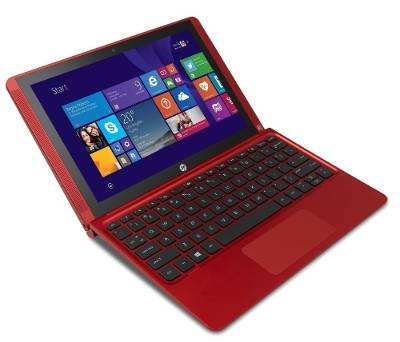 Mobile Geeks spotted a prototype at the Microsoft Booth at the Computex show in Taiwan this week.

The tablet looks a lot like last year’s model, but the keyboard has been improved. Instead of a keyboard case, the 2015 model comes with a keyboard dock which has a sturdy base, which should make it easier to use the 2-in-1 device like a laptop when it’s actually sitting on your lap. The dock has a magnetic docking mechanism.

Mobile Geeks notes that the keyboard is very thin and has no ports. But it helps keep the weight of the entire setup low: the tablet and keyboard have a combined weight of about 1.8 pounds.

The new tablet is powered by an Intel Atom x7 processor and the demo unit features 2GB of RAM and 32GB of storage. HP says the tablet should get up to 12 hours of battery life.

Other features include a USB 3.0 port, a USB type C port, micro HDMI port, and a microSD card reader. There are stereo speakers and dual microphones.

The USB-C port can be used for data transfer, but it’s also the tablet’s charging port.