HP is rolling out new Sleekbook models this fall. That’s what HP calls it thing and light laptops that are virtually identical to ultrabooks — but which don’t fit Intel’s definition of an ultrabook for one reason or another.

In this case, the HP Pavilion Sleekbook 14 and Sleekbook 15 are the right size and shape to be ultrabooks, but they don’t have solid state storage. So they’re disqualified. HP will also offer models with an optional AMD CPU, which is kind of an Intel no-no. 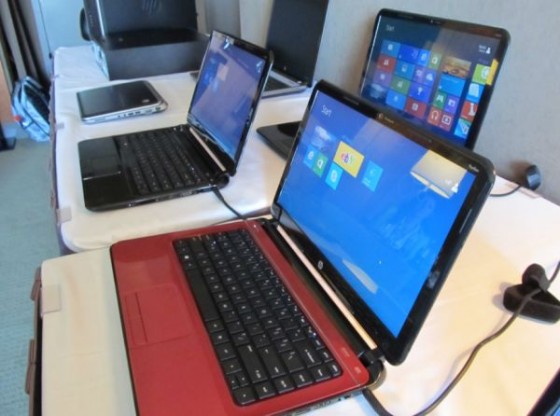 The HP Pavilion Sleekbook 14 is a model with a 14 inch display and a starting price of $500.

The HP Pavilion Sleekbook 15.6 has a larger 15.6 inch display and a starting price of $560. Since the laptop is larger, HP also takes advantage of the extra space to include a numeric keypad next to the keyboard.

Otherwise, the two computers are pretty much the same. Both are available with:

HP will offer the base models with 4GB of RAM and 320GB hard drives. You can pay extra for more — but HP won’t be offering a solid state storage option, at least not in the US.

The idea is to keep the prices on these models relatively low.

The HP Pavilion Sleekbook 15.6 weighs about 4.5 pounds, while the 14 inch model weighs less than 4 pounds.