What do you get if you take the HP Envy 6T ultrabook, replace the 15.6 inch display with a higher resolution full HD panel, add a touchscreen, and replace Windows 7 with Windows 8?

You get the SpectreXT TouchSmart Ultrabook, a new premium laptop that HP plans to launch in December. 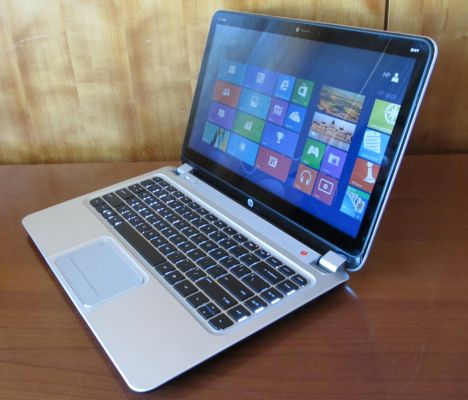 It’s not just the display that’s getting a makeover. While the Envy 6T has a starting price of $700 for a model with a Core i5 chip and 4GB of RAM, the new model will come standard with an Intel Core i7 processor and 8GB of memory.

The HP Envy SpectrXT TouchSmart is the first ultrabook from HP to feature a Thunderbolt port. It also has USB 3.0, Ethernet, and HDMI ports.

Intel doesn’t tell PC makers how heavy or light ultrabooks should be — just how thin. So despite the fact that the laptop weighs 4.77 pounds and has a pretty large case to accommodate the 15.6 inch, 1920 x 1080 pixel display, this notebook is an ultrabook because it measures just 17.9mm thick. That’s about 0.7 inches.

Unfortunately, like most ultrabooks, the battery is not user-replaceable.

I’m still not entirely sold on the idea of slapping capacitive touchscreens on notebooks that don’t function as tablets. But the move from a 1366 x 768 pixel screen to a full HD display is nice.

HP will offer the ultrabook with Windows 8 or Windows 8 Pro. Both versions come with 2 years of Norton security software and Adobe Photoshop Elements and Premiere elements for editing photos and videos.