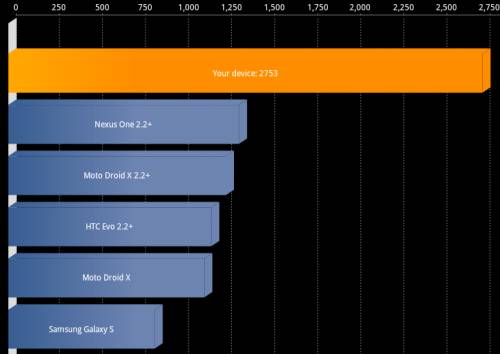 As the CyanogenMod team continues to work on porting Google Android to run on the HP TouchPad tablet, a developer has posted some benchmark results. It’s worth noting that these benchmarks aren’t always reflective of real-world performance and that they were run on a device running software that’s still not fully functional.

That said, benchmarks at least give a basis for comparing similar devices. So it’s interesting to note that the following TouchPad scores:

The HP TouchPad has a 1.2 GHz Qualcomm Snapdragon dual core processor and 1GB of RAM. HP shipped the now-discontinued tablet with webOS 3.0 software, but CyanogenMod and other developers have been working to get Google Android working with the tablet. This will dramatically increase the number of third party apps available for the platform, and it may even improve overall performance.

Early TouchPad reviews noted that the tablet felt a little sluggish at times, and in my own experience the tablet performs some actions very quickly (such as loading web pages), while other actions can take a long time compared to a decent Android or iOS device (loading apps, or switching between running apps).

The benchmark results are certainly promising. I’ve reviewed a number of Android tablets and I’ve never used one with scores this high. Here’s a little summary of some recent test results I’ve seen:

While the test scores are good, Android on the HP TouchPad is still a work in progress. The developers working on the project have managed to get WiFi up and running, as well as touchscreen drivers and support for hardware graphics acceleration. But audio still doesn’t work properly and the Android Market app isn’t functional yet.

The HP TouchPad has been hard to find since HP started selling off remaining inventory for as little as $99, but the company does expect to get one more batch of the 10 inch tablets in stock within the next two months. After those are sold out, it’s likely that we’ll never see another HP TouchPad tablet hit the streets, but it’s possible there could be as many as a million of the tablets in the wild, and there are plenty of people looking forward to a fully functional Android port for the tablets.

The CyanogenMod team won’t release its software to the public until most of the kinks are worked out, but if you want to try a barely-functional version of Android on your TouchPad you can check out an early version released by the now-defunct TouchDroid development team.