It’s been about two years since HP discontinued the HP TouchPad tablet, slashed prices, and cleared out inventory. For almost as long, bargain-hunters and hackers have been making lemonade out of HP’s lemons by installing Android on the tablet and using it as a low-cost, all-purpose tablet.

At this point nearly everything works — it took a while to add Android support for the tablet’s front-facing camera, but eventually developers figured out how to do it.

Now developer JC Sullins has worked another minor miracle, and added Bluetooth support to his latest build of Android 4.2.2 Jelly Bean for the HP TouchPad. 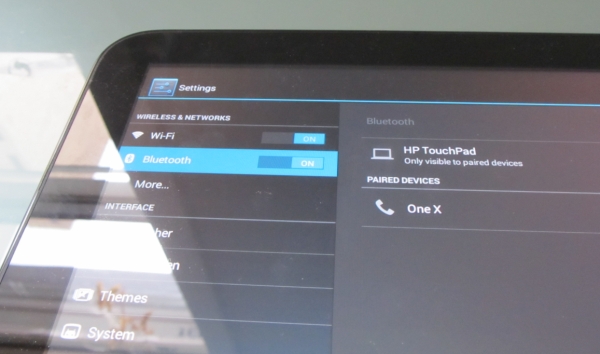 I don’t have a Bluetooth keyboard, mouse or headset handy, but I took the software for a spin on my HP TouchPad and I can confirm that I can now send files between my phone and tablet using a Bluetooth connection.

JC Sullins still calls this an experimental build, but at this point the HP TouchPad can run Android with a semi-functional camera, working Bluetooth, and hardware video acceleration.

The tablet landscape has changed quite a bit over the last few years, and it’s not as hard to find a $100 tablet as it was in 2011 — and the TouchPad’s 1024 x 768 pixel display and 1.2 GHz Qualcomm Snapdragon dual-core processor are starting to look a bit dated. But it’s still not a bad tablet, even by today’s standards.

The TouchPad has wide viewing angles, a sturdy design, decent speakers, and most importantly — if it’s the tablet you already own, there’s not much reason to replace it with a newer model when hackers keep bringing new software updates.

You can download JC Sullin’s latest builds of Android for the HP TouchPad from his goo.im page. The ROM I tested is called cm-10.1-20130804-EXPERIMENTAL-tenderloin-BLUETOOTH_TEST.zip.

If you already have Android, Moboot, and a custom recovery on your HP TouchPad, you can just download the file and perform a clean or dirty flash to update your tablet — I did a dirty flash (which means I didn’t wipe my system partition), and the update worked perfectly without wiping my apps or data.

If you have an HP TouchPad running webOS and you have yet to install Android on it, you can follow our step-by-step guide for installing Android on the HP TouchPad.

via RootzWiki, xda-developers, and thanks Andrew Foster!