HP may be pushing new inexpensive Android and Windows tablets, but the HP TouchPad tablet the company launched 2 years ago continues to have staying power — even though HP discontinued the tablet just a few months after it hit the streets.

The HP TouchPad is a 9.7 inch tablet with a dual-core processor, 1GB of RAM, and at least 16GB of storage. It originally shipped with webOS software, which is now largely dead (although it lives on as a lackluster open source project). But hackers have been running Android, Ubuntu, and other operating systems on the tablet for almost as long as it’s been around.

Now the first builds of Android 4.4 KitKat are available. 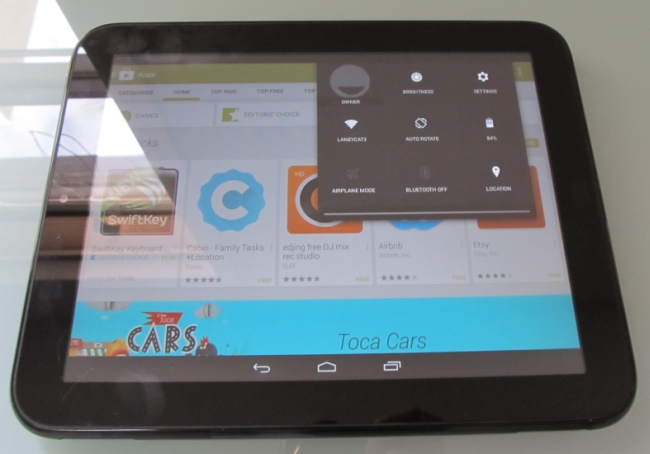 If you’re keeping track at home, that means the tablet’s been able to run pretty much every version of Google’s operating system since Android 2.3 Gingerbread.

As of mid-November, 2013 KitKat is still very much a work in progress. Developer flintman has posted a build of an Android Open Souce ROM called Evervolv at the xda-developers forum.

The options to reboot into recovery are also broken for now — but you can always reboot your tablet manually to get to the Moboot bootloader.

In other words, if you want to help test for bugs, go ahead and install the software. If you want a stable operating system on your HP TouchPad, you should probably wait a little while.

Update: There’s now a much simpler way to install recent builds of Android on the HP TouchPad using a tool called TouchPad Toolbox.

ACMEInstaller is the tool that helps you flash Android onto an HP TouchPad running webOS. If you’ve used it in the past, you can typically move from one version of Android to another using ClockworkMod or TWRP recovery, but if this is your first time installing Android on a TouchPad you might want to follow our step-by-step guide for installing Android, using iMarck90’s new version of ACMEInstaller.

If you’re already dual-booting Android and webOS, another option is to reboot into webOS and use an app called Tailor to resize your partitions.

Roland Deschain has a video showing how to do that.

Or if you’re looking for steps on using ACMEInstaller to load Evervolv Android 4.4 KitKat, he’s got a video for that too.

While it takes a bit more work to get Android 4.4 up and running on the HP TouchPad than some earlier builds, it’s kind of remarkable to see the independent developer community keeping alive a tablet that HP abandoned long ago.