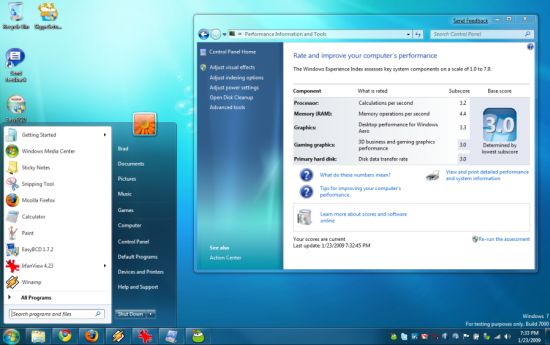 There’s been a lot of speculation over the last few days about which version of Windows 7 computer makers would be most likely to preload on netbooks. Every version of Windows 7, right up to the Ultimate Edition, will be capable of running well on low power, low cost mini-laptops. But Microsoft needs to make some money on its operating system, so the company’s not exactly going to give away Windows 7 Ulitmate for free. So what does that mean for netbooks?

As it turns out, it means they’ll likely come at a variety of price points. HP officials told Computer World recently that the company plans to offer at least 3 different versions of Windows 7 on netbooks: The low cost Starter Edition as well as Home Premium and Professional editions.

Windows 7 Starter Edition will be the least capable of the three. Users will only be able to run up to three programs at a time. In the past Microsoft has only made Starter Editions of its operating system available in developing nations, but the company plans to offer Windows 7 Starter Edition in the US to give netbook makers a low cost option for their computers. It’s not yet clear what the price difference will be between the various editions of Windows 7. But it’s probably safe to bet that the Home Premium and Professional editions will cost a bit more, driving up the cost of those netbooks.

The question then is, will customers be willing to pay for the ability to run more than three programs? And how much?