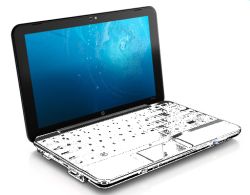 Here’s a little secret about netbooks. You want to know why they all have 7 inch, 8.9 inch, or 10.2 inch displays? It’s because most of them are using the same displays designed for digtial pictrue frames which come in those sizes. There aren’t any 8.4″ digital picture frames, and so there aren’t any 8.4″ netbooks. Maybe one day netbooks will be produced in large enough numbers that netbook makers will essentially dictate the size of digital picture frames. But it’s just as likely that the idea of a digital picture frame that does nothing but display photos will disappear as technology gets cheaper.

Notebooks.com reports that HP is preparing to take the first step down that road by introducing a digital photo frame that has some of the same functionality as a netbook. It will reportedly have a web browser, an email client, and the ability to display news feeds and other widgets like weather or, you know, pictures.

It’s likely that HP would draw upon the same technology used in the HP Mini 1000 netbook, which means the picture frame could have an Intel Atom processor and a 10 inch display, and may run a custom version of Ubuntu Linux. HP is expected to charge about $400 for the photo frame, which is the same price as the base model HP Mini 1000. The rumored device would be controlled by a remote control, but a touchscreen version could eventually replace the remote control model. Or maybe the whole thing’s just a rumor and HP has no interest in a combo photo frame/netbook.