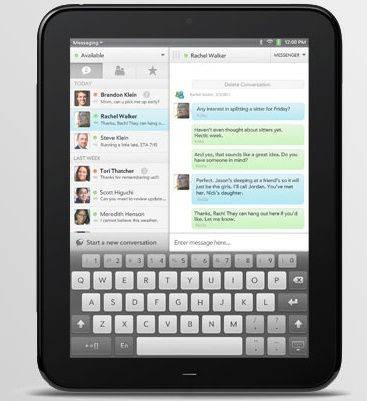 The HP TouchPad launches this Friday and HP’s first webOS tablet is a pretty big gamble. How big? Well, the company spent $1.2 billion to acquire Palm and its webOS software. Not all of those eggs are in the tablet basket. Palm continues to introduce new smartphones and HP has talked about using webOS on desktop and laptop computers and other devices including internet-connected printers. But really, the TouchPad is a big part of it.

But how do you make a tablet stand out in the age of the Apple iPad and roughly a trillion Android tablets? HP’s hope is that by controlling the hardware and the software the company will be able to offer a more consistent user experience than Android. Since there are multiple versions of the Android operating system in the wild, and multiple manufacturers producing devices with the operating system, sometimes it feels like a crap shoot when you’re trying to figure  out if an app will even run on your shiny new phone or tablet.

Apple has had great success by controlling the software and hardware on its computers, phones, media players, and tablets, so HP’s gamble makes sense. But Research in Motion has taken a similar approach with the BlackBerry PlayBook tablet, and while the company has shipped about half a million units, that’s just a drop in the bucket when compared with 25 million iPads Apple has sold.

In other words, there’s no guarantee that simply producing good hardware and software and making sure they play well together will lead to consumer acceptance of your product. In a baffling display of logic though, HP’s Phil McKinney tells Fast Company thatthe Android ecosystem is fragmented which causes confusion among developers and customers when they don’t know for certain which apps will run on which devices. The baffling part is that HP’s solution is to go with webOS — a platform where there certainly isn’t the same kind of confusion — but where there simply aren’t as many apps.

Still, HP executives say that there will be about 300 apps developed specifically for the TouchPad on day one. That might sound like a really small number, but it’s actually much higher than the number of tablet apps designed for Android when the first Android 3.0 Honeycomb tablet launched in February. In fact, there still might not be 300 apps designed specifically for Honeycomb tablets. Fortunately both webOS 3.0 and Android 3.x do a pretty good job of running smartphone apps as well as tablet apps.

Is it too late for HP to enter the market and shake things up? Not necessarily. After all, Apple wasn’t the first company to release a smartphone or a tablet. There’s always room for good ideas to rise to the top. But is HP making a $1.2 billion gamble with its latest move? It sure looks like it.

5 replies on “HP: The TouchPad will launch with less apps than Android, but offer a more unified experience”