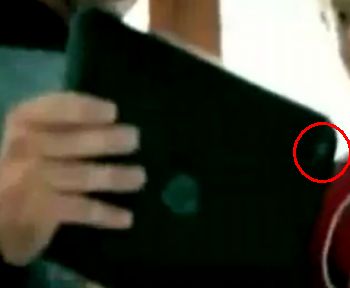 The upcoming HP TouchPad tablet has a lot of things going for it: a nice big 9.7 inch, 1024 x 768 pixel display, a speedy dual core 1.2 GHz processor, and webOS 3.0 software with a heavy emphasis on multitasking. But one thing it doesn’t have — at least according to the official spec sheet — is a rear-facing camera. But someone apparently forgot to send the memo to the folks responsible for a promotional video showing off the tablet.

PreCentral spotted a rear camera and an augmented reality app which makes use of it in the video. Unfortunately HP has only promised to deliver a 1.3MP front-facing camera for video chat.

Honestly, I’m not all that heartbroken about this. While the Apple iPad 2 and most upcoming Android tablets have front and rear cameras, you have to wonder how often you’re going to hold up a 10 inch piece of plastic and use it to shoot photos or videos. While integrated cameras changed the way we think about cellphones, the front-facing camera for video calls makes a lot more sense on larger tablets.

Still, it’s nice to have both… and while HP hasn’t officially said anything about a rear camera, it’s possible that one could make it into the final production unit. The Touchpad isn’t expected to launch until June, so there’s plenty of time for HP to change things up a bit.

You can check out the video after the break, thanks to the folks at Engadget.