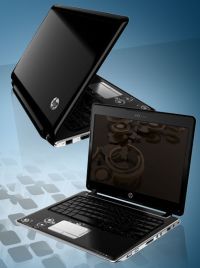 HP has started taking reservations for the upcoming Pavilion dv2 series laptop. Notice I said reservations and not pre-orders. That’s because HP has yet to unveil the actual price or exact specifications of these new notebooks. But here’s what we do know: They’ll have 12.1 inch displays, weigh less than 4 pounds, and feature the new AMD Neo processor which should offer significantly better performance than the Intel Atom CPU found in most netbooks today.

In other words, the HP Pavilion dv2 will be too big, heavy, and probably too expensive to fit into the same class of netbook-style computers like the HP Mini 1000 and HP Mini 2140. But AMD and HP are targeting a slightly different market with the dv2: People who are looking for a thin and light computer that won’t cost as much as a MacBook Air, but which will have a higher resolution screen, larger keyboard, and offer better graphics and CPU performance than you’ll find on today’s netbooks.

If HP can keep the starting price for the dv2 at around $700 (which is the price HP was throwing around at CES in January), these machines could be a nice alternative to netbooks for many users. With a starting weight of just 3.8 pounds, the dv2 won’t weigh much more than an Asus Eee PC 100HE, which tips the scales at about 3.2 pounds. But the dv2 will pack some features you wont’ find on the Eee PC 1000HE, like hard drives up to 500GB, and the ability to decode Blu-Ray videos (through an external disc drive).