A few years ago PC makers seemed to be focused on driving up the prices of portable computers by emphasizing premium devices such as thin, light, and powerful ultrabooks priced around $1000 and up. These days it looks like companies are moving in the other direction by launching laptops that are priced competitively with smartphones and tablets.

Microsoft and its partners are promising we’ll see a number of laptops priced at $249 or less this fall. One of them is a the new HP Stream Notebook which is expected to sell for just $199.

HP isn’t taking orders for the laptop yet, but support documents posted to the HP website tell us just about everything there is to know about the HP Stream (other than the launch date and what the assembled laptop looks like). 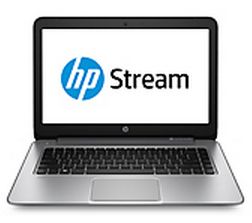 HP includes a 32Whr battery and the notebook runs Windows 8.1 software and comes with 100GB of cloud storage for 2 years, courtesy of Microsoft’s OneDrive.

It doesn’t look like the RAM or storage will be easy to replace, as they’re affixed to a rather small system board that looks more like something you’d normally see in a tablet than a notebook. But the repair manual does show that you could probably open up the case and replace the battery, keyboard, touchpad, display, wireless panel, or other components… if you feel the need to do any of those things to a laptop that sells for just $199.

Interestingly, the HP Stream is only the second device I’ve heard about that features AMD’s new low-power “Mullins” chip. The other is also made by HP. The HP Pavilion 10z is a 10 inch, $250 laptop featuring a  slightly less powerfulversion of AMD’s new chip.