Lenovo isn’t the only company preparing to launch a new convertible notebook with a new 6th-gen Intel Core “Skylake” processor.

HP is also updating its Spectre x360 line of convertibles with a new model sporting an Intel Core i5-6200U processor. 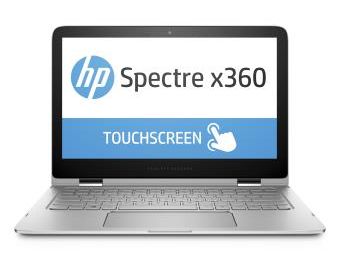 At first glance, the HP Envy x360 looks like a portable notebook. But it has a hinge that allows you to push the screen back 360 degrees until screen is back-to-back with the keyboard, letting you hold the touchscren laptop like a notebook.

Like many convertibles with reasonably large displays, the HP Spectre x360 is reasonably compact for a notebook, but kind of large for a tablet. It measures 12.8″ x 8.6″ x 0.6″ and weighs about 3.2 pounds.