HP is expanding its Spectre line of premium thin and light laptops with the introduction of a new HP Spectre x360 14 laptop featuring a 13.5 inch, 3000 x 2000 pixel OLED touchscreen display, a 360-degree hinge that lets you use the PC as a notebook, laptop, or something in between, and support for up to an Intel Core i7-1165G7 Tiger Lake processor.

This is the first member of the HP Spectre family to feature a display with a 3:2 aspect ratio, and HP claims it delivers the “viewability of a 15-inch device with the mobility of a 13.5-inch form factor.”

The HP Spectre x360 14 should be available from HP.com this month for $1200 and up and it should hit Best Buy in November. 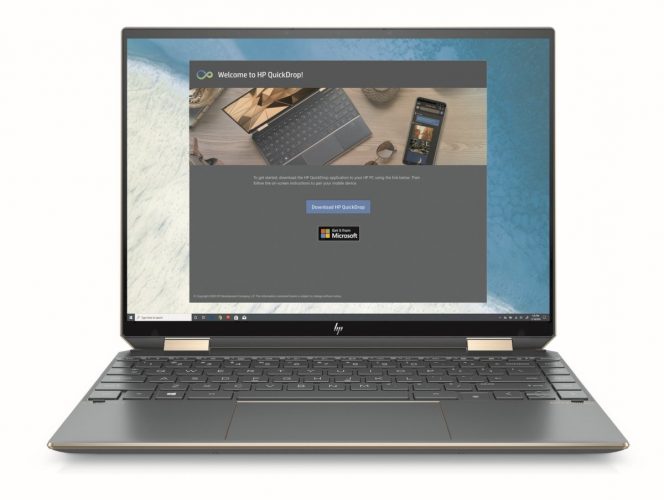 If you prefer a 16:9 aspect ratio display, HP is continuing to offer 13.3 inch and 15.6 inch models, but this new entry offers more vertical screen space than the former, while having a smaller overall footprint than the latter.

There’s still enough room for a dedicated row on the right side of the keyboard for home, end, page up, and page down keys. And HP says the trackpad on this notebook is nearly 17% larger than the one on the company’s previous-gen 15 inch Spectre laptops.

Other features include dedicated camera shutter button in the row of Fn keys, a fingerprint reader between the Alt and left arrow keys, support for an active pen, and the laptop is an Intel Evo certified device.

HP says the laptop will be available with up to 16GB of LPDDR4x-3200 RAM (onboard and not user upgradeable), up to 1TB of PCIe NVMe storage and 32GB of Intel Optane memory, and the HP Spectre x360 4 features two Thunderbolt 4 ports, one USB Type-A 10 Gbps port, a headset jack, and support for WIFI 6 and Bluetooth 5.0.