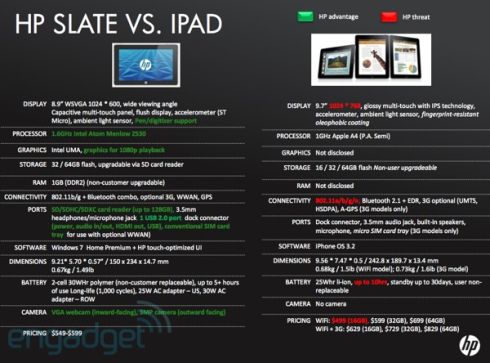 Just a few hours after HP unveiled its latest video telling us almost nothing about the company’s upcoming slate PC, the folks at Engadget got their hands on a possibly leaked document outlining the tablet’s specs.

Here’s the rundown: 1.6GHz Intel Atom Z530 CPU, 8.9 inch, 1024 x 600 pixel capacitive multitouch display, a graphics accelerator for 1080p HD video playback, 1GB of RAM, 32GB to 64GB of flash storage, and a battery that should be good for up to 5 hours. Unlike a certain competing tablet, this model will have several expansion options including an SDHC card slot and USB port. It also has 2 cameras, HDMI output, and an optional 3G modem.

The HP Slate will apparently run Windows 7 Home Premium, which means it will feature the operating system’s touch-friendly features including simulated right-clicking, the ability to tap and drag some content like web pages in Internet Explorer, and touch-navigation for Windows 7 jump lists and other features. It will also have a custom touch-optimized user interface from HP, which I imagine will look something like the software HP puts on its TouchSmart line of PCs.

There’s still no word on a release date.