The HP Slate 21 is an all-in-one desktop PC that runs Google Android. You can also use it as an enormous tablet if you’d like.

HP says the Slate 21 will be available in September for $399 and up. 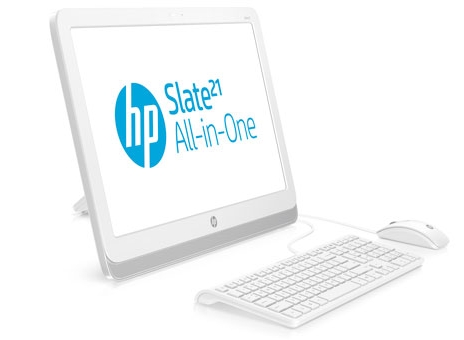 The computer is powered by an NVIDA Tegra 4 ARM Cortex-A15 quad-core processor and ships with Android 4.2.2 Jelly Bean. Theoretically you may be able to convince Ubuntu or other desktop Linux operating systems to run on the hardware, but for now HP is positioning the HP Slate 21 as an Android device.

It has stereo speakers, a front-facing webcam and support for wireless printing. You can use the Slate 21 with your fingers, but you can also connect a keyboard and mouse and use it like a traditional desktop computer — albeit one that runs Android apps rather than Windows software.

With a growing number of “mobile” apps for editing documents, surfing the web, creating and editing media, and much more, the distinction between a mobile OS like Android and a “desktop” OS like Windows isn’t as great as it once was.

The press images also show an adjustable kickstand on the back of the Slate 21. You can use it to prop up the system like a PC monitor, or to lay the system at an angle so it can be used from above for writing, drawing, playing games, or other activities.

There’s no word on how much the Slate 21 will cost, when it will be available, or what kind of battery (if any) it will have. I’m also curious to know how much it weighs. While this isn’t the sort of tablet you’re likely to carry to the coffee shop, some monitor-sized Android tablets weigh just a few pounds, while others weigh as much as 11 pounds — which makes them a bit tougher to lug around the house or use on your lap.

HP’s apparently been testing the Slate 21 for at least a few months. Benchmarks results for the device showed up online in April.

via Engadget and CNET