HP may be taking a page out of Samsung’s book and getting ready to launch a large Android tablet. An unannounced device called the HP Slate 12 Pro showed up at the website for the GFXBench online benchmarking utility recently.

It appears to be an Android tablet with a 12.5 inch display. 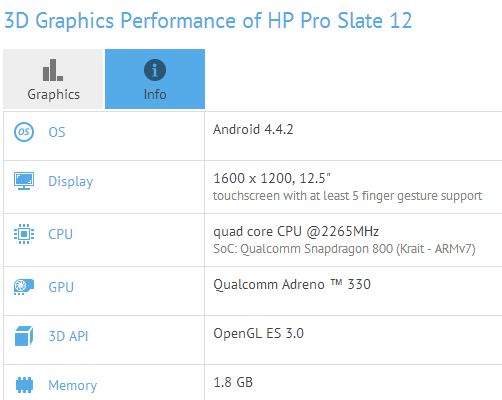 The tablet reportedly features a Qualcomm Snapdragon 800 quad-core processor, a 1600 x 1200 pixel display (with a 4:3 aspect ratio), 2GB of RAM, and 16GB of storage. It has an 8MP rear camera and 2MP front-facing camera.

Not every device that shows up at the GFXBench website actually hits the streets. It’s possible someone at HP is testing an internal prototype that may not be ready for launch. It’s possible someone faked the name of their device and tricked the website into displaying inaccurate information. But GFXBench has been a decent source of leaked specs and device names over the past few years… and many of the items which show up in these listings do eventually end up launching as real products.

It also wouldn’t be shocking to see HP release a tablet with these specs. The company’s HP Slate 8 Pro also has a 1600 x 1200 pixel display, although that model has a smaller 8 inch screen and is powered by an NVIDIA Tegra 4 processors.

7 replies on “HP Slate 12 Pro Android tablet on the way?”