HP may be working on a 16 inch all-in-one PC or tablet with a high-resolution display, a fast processor, and Google Android software.

Specs for an unannounced device called the “HP red” showed up at the GFXBench website recently. 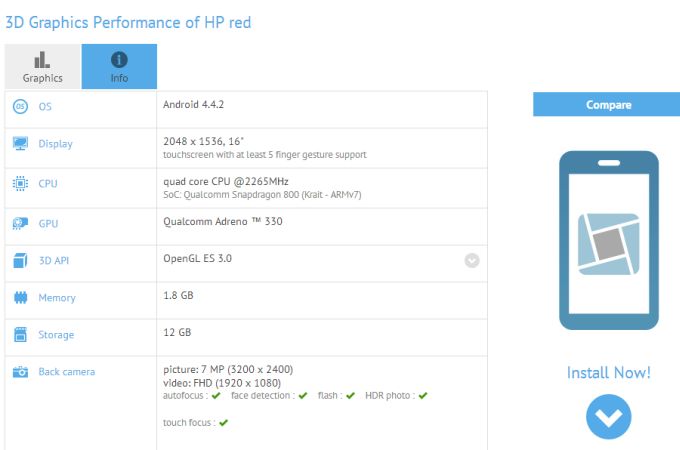 The device is said to feature a 2048 x 1536 pixel multitouch display, a Qualcomm Snapdragon 800 quad-core processor, 2GB of RAM, 16GB of storage, front and rear cameras, and Android 4.4 KitKat.

While a device with a 16 inch display seems ludicrously large for a tablet, HP does offer a line of all-in-one desktop PCs which run Android software. You can use them as a desktop PC or pick them up and carry them around the house for use in the living room or kitchen when you want to watch videos, read recipes, or play games.

The HP red could be a new model in that line of HP Slate devices. But according to GFXBench, this model not only has WiFi, Bluetooth, and NFC, but also features you normally only find in a mobile device designed to be used outside the house, including GPS support.

It’s possible the HP red isn’t a real product at all. It could be some sort of prototype that HP is testing but which the company has no plans to release. Or someone could have faked the product name and specs while running GFXBench on a different device.