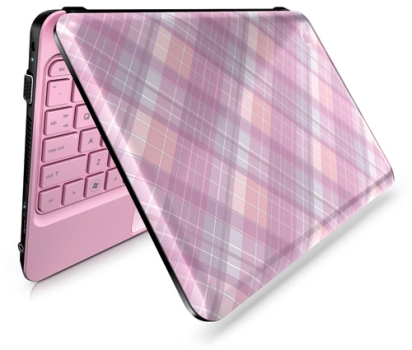 HP launched a number of new netbooks today including the HP Envy 14, Envy 16, Pavilion dm4, dv5, dv6, and dv7. You can find more details in the press release, but I’m going to focus on the least exciting new announcements because let’s face it, I’m just not that interested in $1000 notebooks with 14 inch displays.

HP is making a small update to its HP Mini 110 netbook, which now ships standard with a 6 cell battery instead of a 3 cell battery.

The company is also giving the HP Mini 210 netbook a little visual refresh. While you won’t find any new processor, storage, or wireless options in the new models, you do get a couple of new color options.

The first new color scheme is called Preppy Pink, and it’s basically a pink and purple plaid design that looks mildly more attractive than most pink netbooks I’ve seen to date. But just mildly. HP uses a 3D imprint technology to make it look like some of the colors are floating above others.

The other new choice is called Crystal White model also has a 3D textured design, but like the HP Mini 110 Tord Boontje Edition netbook, the pattern is sort of white on white, making the design much more subtle.

One of the best things about both designs is that they’re fingerprint-resistant and don’t feature glossy, smudge-prone areas near the palm rest or around the screen bezel.

You can find some hands-on photos of the new models at Laptop Magazine.

Update: Wireless Goodness spotted another potentially new model at the FCC web site today. It’s labeled as an HP H110UI1 and my guess is that it’s a variation on the HP Mini 110 — although it looks like the battery compartment is near the rear of the netbook instead of tucked away in the bottom as it was on early HP Mini 110 models.

5 replies on “HP provides minor updates to its netbook lineup”