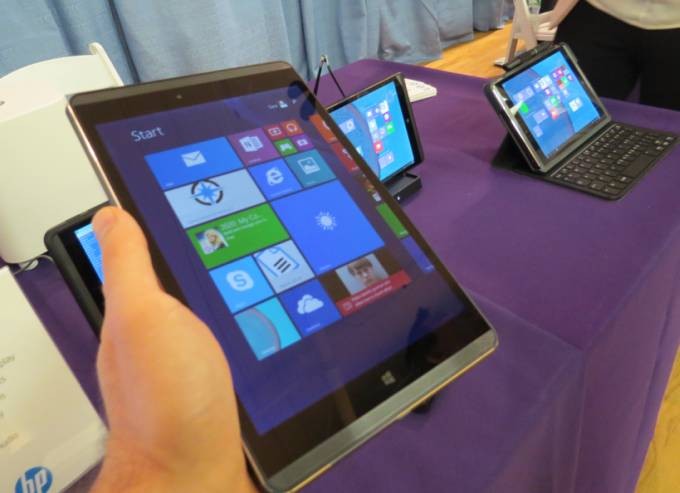 The entry-level model features 2GB of RAM and 32GB of storage, but HP will offer 64GB and 128GB models. Select models will also be available with 4GB of RAM, making this one of the few small Windows tablet with that option.

As a business class device, there’s one thing you won’t get: a free 1-year subscription to Office 365. If you want Office, you’ll need to pay for it.

Other features include stereo front-facing speacers, 802.11ac WiFi, Bluetooth 4.0, optional 3G and 4G modules, a microSDXC card slot, a USB-C connector (for charging and/or connecting peripherals, an 8MP rear camera, a 2MP front camera, and a sturdy case with plastic and metal elements.

The tablet also has an active digitizer and works with an optional Atmel digital pen, which is sold separately. It enables pressure-sensitive input for writing or drawing and also lets you hover over the screen as if you were using a mouse. That makes it easier to interact with desktop-style apps when using the HP Pro 608 as a tablet.

Want to use it like a laptop? There’s also an optional keyboard case. And if you want to treat it like a desktop, there’s a travel dock with HDMI, Ethernet, and full-sized USB ports.

The tablet measures 8.1″ x 5.4″ x 0.33″ and weighs about 0.8 pounds. It felt pretty light-weight, but sturdy in my hands when I got to spend a few minutes with the tablet recently. The high-res screen might be too high-res to comfortably interact with some legacy Windows apps that haven’t been optimized for high-res screens, but Universal Windows apps should look great on the tablet.

All told, it could be an interesting alternative to the Microsoft Surface 3 for folks who are looking for something with similar functionality in a slightly smaller package.