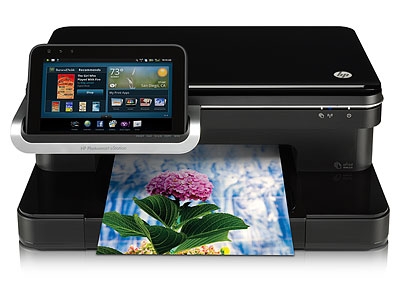 It looks like you may be able to pick up a Samsung Galaxy Tab running Google Android soon for about $399 when you sign up for a 2 year service contract. But if you’re content with a significantly less powerful tablet which also happens to be bundled with an internet-connected printer, you can grab the HP Photsmart eStation C510 today for $399.99.

The tablet and printer combo formerly known as the HP Zeen includes a decent looking color photo printer with WiFi and an SD card reader, some ink cartridges to get you started, and oh-yeah, something HP called a “Detachable color Touchscreen.”

That touchscreen is actually a 7 inch tablet running Google Android 2.1. It doesn’t have all the bells and whistles we’ve come to expect from Android phones and tablets. There’s no support for the Android Market, and the default search engine is Yahoo, not Google.

That said, the tablet does include a web browser, and a series of apps and widgets designed to work with the printer. There’s an eBook reder, which allows you to read books or print them. Engadget reports that there are weather, stock market, and search tools.

If you’re just looking for a tablet for web browsing and you also happen to be in the market for a new printer, the eStation C510 looks like an interesting option. But if you’re looking for a full featured Android tablet, you’ll probably want to look elsewhere. HP is focusing on its upcoming Windows and WebOS-based tablets, with no plans for a standalone Android model.