The HP Pavilion x360 is an 11.6 inch Windows laptop that becomes a tablet when you push the screen back 360 degrees. It’s basically HP’s answer to the Lenovo Yoga line of convertible notebooks… but cheaper.

I reviewed a model last year and was impressed with the value proposition… but underwhelmed by the battery life and display. Performance wasn’t anything to write home about either.

Now HP is refreshing the x360 lineup with a new model sporting a more powerful processor. 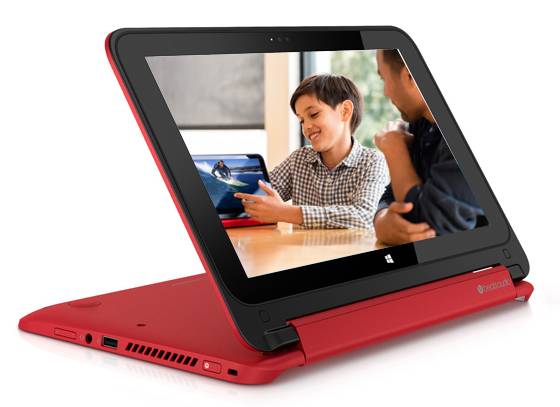 The new HP Pavilion x360 features an Intel Core M 5Y10c dual-core processor. That’s a low-power chip with a TDP of just 4.5 watts. In other words it uses less power than the 7.5 watt Pentium chip in the laptop I reviewed in 2014.

But the Core M is based on 5th gen Intel Core “Broadwell” technology which means it should offer better all-around performance than the Bay Trail processors HP had used up until now. The new models also feature more powerful graphics thanks to the Intel HD Graphics 5300.

HP hasn’t officially launched the new Core M-powered Pavilion x360 in the United States yet, but it’s already showing up in Malaysia, India, and other regions.