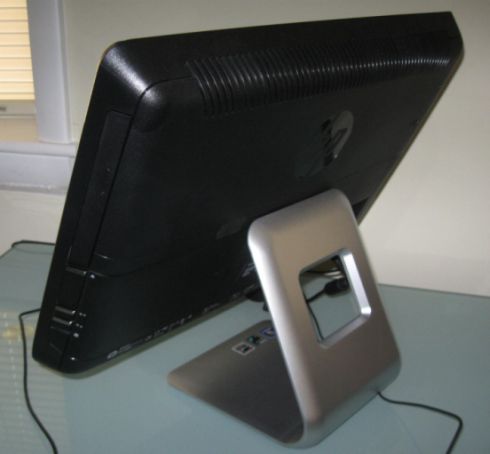 HP has been making all-in-one desktop PCs for a few years, but the HP Pavilion MS214 is one of the company’s first budget models. While other companies including Lenovo, Asus, MSI, and Shuttle have chosen to keep costs down in similar machines by using netbook-like guts including Intel Atom processors and Intel GMA 950 graphics, the HP M214 uses an AMD processor and ATI graphics.

For that reason, it’s easier to compare the Pavilion MS214 to a thin and light notebook than a netbook. In my tests, the computer scroed about as well on most tests as I would expect a notebook with an Intel CULV processor to perform. But the HP Pavilion MS214 isn’t a notebook. It’s a full-fledged desktop computer built into an 18.5 inch widescreen display.

The HP Pavilion MS214 is an attractive all-in-one desktop. The display has a glossy black border while the base is a metallic silver color. The computer measures just over 2 inches deep, although the base takes up about 8 inches. 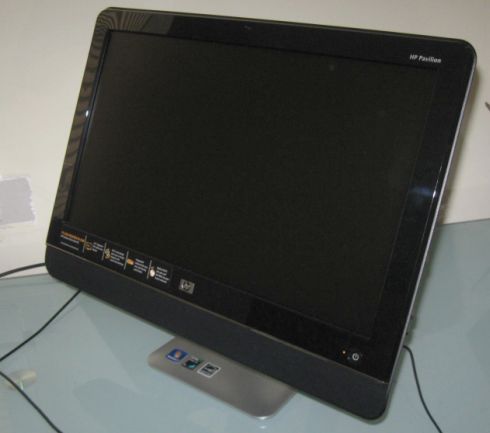 The speakers are built into the bottom of the display, while the webcam is located at the top.

Around the sides of the computer you’ll find 2 USB ports, mic and headphone jacks, a multi-format flash card reader, a Super Multi disc burner, and brightness controls. On the back of the computer there are 4 more USB ports, plus an Ethernet jack, a line in jack, and the power jack. 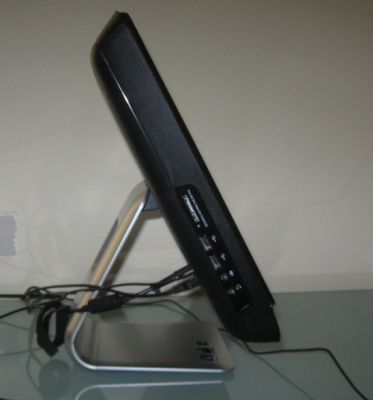 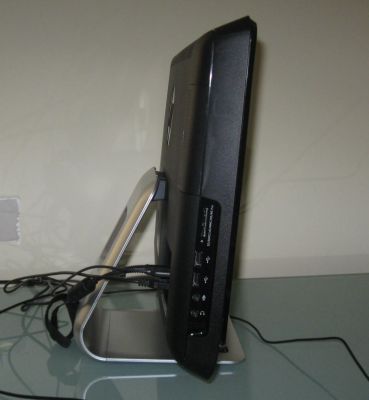 HP ships the Pavilion MS214 with a USB keyboard and USB optical mouse. While this undoubtedly helps keep the costs down, running wires from the back or side of the computer to the mouse and keyboard detracts from the clean aesthetic you get by packing your computer and display into a single piece.

By comparison, the Asus Eee PC Eee Top ET2002 ships with a wireless mouse and keyboard. 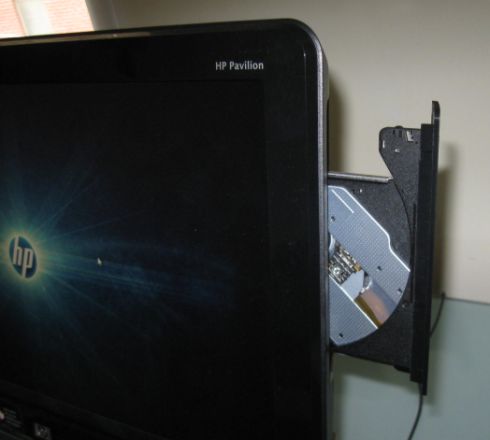 The display 18.5 inch screen has a maximum resolution of 1366 x 768 pixels. At a time when this screen resolution is increasingly common on 11.6 inch notebooks, I kind of expect a display this large to be 1600 x 900 or higher resolution. But HP isn’t the only company putting out an all-in-one PC with a screen this size and resolution, so you might need to get a larger model if you want a higher resolution display.

The screen looks good at a variety of viewing angles. I found it didn’t really matter whether I tilted the screen all the way up or most of the way down. I didn’t have any problems reading text. And colors are vivid when watching videos. 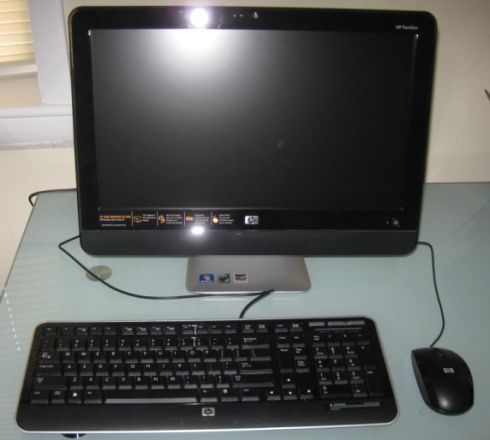 HP’s higher end all-in-one desktops include touchscreen displays and HP’s TouchSmart software. But the Pavilion MS214 is a budget desktop priced under $600. One of the ways HP cut the cost was to cut out the touchscreen.

While the HP Pavilion MS214 is cheaper than its TouchSmart siblings, the computer is more powerful than a lot of the budget all-in-ones on the market thanks to the its 1.5GHz dual core AMD Athlon X2 processor and integrated ATI Radeon HD3200 graphics.

The computer gets a Windows 7 Experience score of 2.9, with the lowest score gong for desktop graphics performance. It fares much better in the processor, gaming graphics, RAM, and hard drive categories.

For day to day computing tasks, the MS214 has more than enough power. I had no problem surfing the web with a dozen or more browser tabs open while listening to music in the background. And the graphics processor is capable of handling local HD video content as well as some video games.

Playing real-time-strategy game Age of Empires on this computer was a pleasure. With the graphic detail turned all the way up, gameplay was very smooth.

Out of the box I had no problem watching 720p or 1080p video using Windows Media Player or the included MediaSmart software, although CPU usage was near 100% for 1080p video and hovered between 50% and 70% for 720p playback.

I was also able to play 720p video from Hulu smoothly in windowed mode, although it started to get choppy when I blew the video up to full screen. Standard definition video from Hulu played well in full screen, something that has long given trouble to computers with Intel Atom processors and GMA 950 graphics.

1080p YouTube video was pretty much unwatchable and 720p video from Vimeo was OK in windowed mode but a little choppy in full screen.

I tried installing the latest ATI drivers and Flash Player 10.1 pre-release to see if it made a difference, but it did not. It’s possible that future versions of Adobe Flash and/or the ATI drivers might improve Flash video performance.

I ran my standard set of benchmarks on the computer. This includes copying and zipping a large folder with many files and transcoding audio and video files. The HP Pavilion MS214 scored much higher than a typical netbook or nettop with an Intel Atom CPU. But it wasn’t quite as fast as some of the newer laptops with Intel Consumer Ultra Low Voltage processors. 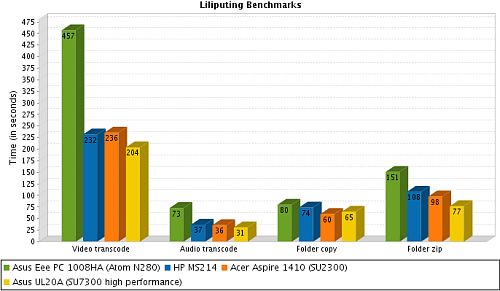 Here’s a brief explanation of the benchmarks:

I realize that these benchmarks don’t cover every possible activity for this computer. But I’m not really a hardcore gamer, so I don’t have a lot of really GPU-intensive games or other applications lying around to test. And the truth is, if you’re a hardcore gamer, this probably isn’t the computer you’re going to get.

But the HP Pavilion MS214 does have enough oomph for casual computing, playing some recent video games, and HD video (although it still struggles with some HD Flash video from the web).

The computer’s speakers were also fairly loud and clear, although you may want to invest in a pair of external speakers if you care about bass. The speakers sound like good laptop speakers, which is to say they’re good for bad speakers.

The computer is quiet, but not silent. You can definitely hear a low hum coming from the PC as it operates.

While this computer doesn’t have the same TouchSmart software that comes with HP’s touchscreen-toting all-in-one desktops, HP does load it up with MediaSmart software which is sort of HP’s answer to Windows Media Center.

That is to say, MediaSmart features music, movie, and photo applications that are designed to be used in full-screen mode, complete with big icons that are kind of begging to be touched with your fingertip, even if you can only navigate the program with a mouse and keyboard on this model. 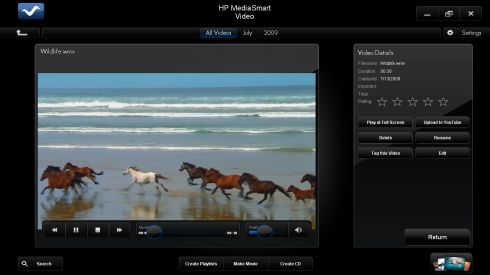 You also get HP’s PC Dock application which gives you quick access to MediaSmart and other HP applications. You can also customize the dock with shortcuts to any application by dragging and dropping the shortcut to the dock. 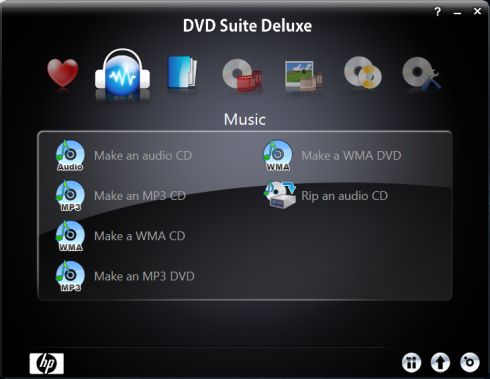 As I mentioned above, the HP Pavilion MS214 comes with a wired mouse and keyboard. They’re pretty standard fare. Honestly I have a hard time telling one USB mouse from another at this point. But this model is an optical USB mouse with two buttons and a scroll wheel.

The keyboard took a little getting used to. The keys are a little harder to press than I would like, and they make a fairly loud clicking noise as you type.

There are dedicated buttons on the keyboard for increasing or decreasing the volume or hitting mute. And the F5 – F8 keys can be used as media playback keys. For example, hitting Fn + F6 triggers the play/pause command. 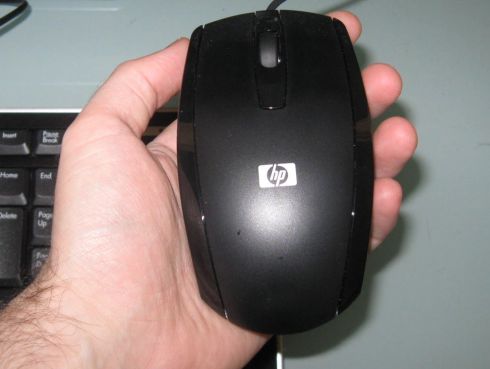 Wireless peripherals would certainly help reduce the clutter on your desktop, but I suppose you could always buy your own wireless mouse and keyboard if you really dislike the ones that come with the MS214. Of course, that would drive up the overall price a bit, which kind of defeats the purpose of purchasing a budget-priced all-in-one computer.

On the other hand, wireless peripherals use batteries which need to be changed on a regular basis, while the USB mouse and keyboard that come with this computer are battery-free.

The HP Pavilion MS214 is an attractive all-in-one computer with a reasonably fast processor and a reasonably low price.

For about the same price you can pick up an Asus Eee Top ET2002 with a larger screen and NVIDIA graphics. But the Asus model is hampered by a slow Intel Atom processor. Or you could just pick up a cheap desktop and monitor for even less, but they’ll take much more space in your home office, bedroom, kitchen, or wherever you plan to put this PC. 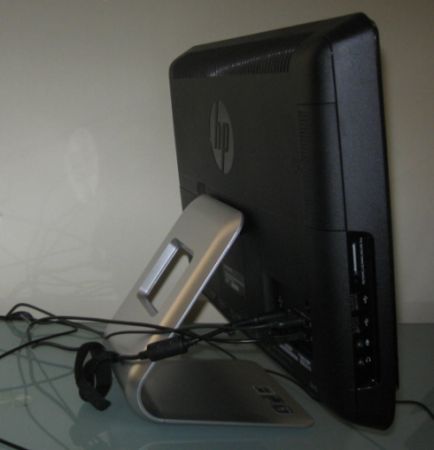 The reason I’ve started covering all-in-one computers on Liliputing is that like notebooks, they’ve been impacted by the most important component of the netbook revolution: The idea that customers don’t always need bleeding edge performance in their computers.

Sometimes low cost is more important than high performance. And the MS214 offers decent enough performance for most everyday computing tasks in a sleek package that looks like it should cost much more than $560.