As expected, HP has introduced its first Chromebook. The HP Pavilion 14 is a laptop with a 14 inch display, an Intel Celeron processor, and Google’s Chrome OS operating system. 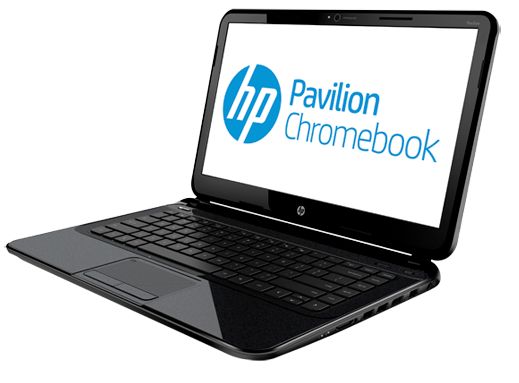 Under the hood, the HP Pavilion 14 Chromebook is a lot like other models we’ve seen from Acer and Samsung recently. It sports a 1.1 GHz Intel Celeron 847 processor, 2GB of DDR3 memory, (which is upgradeable to 4GB), and a 16GB solid state drive.

The biggest thing setting the HP Pavilion 14 from other Chromebooks is the big screen. The laptop has a 14 inch, 1366 x 768 pixel display, while most Chromebooks have 12 inch or smaller screens.

Still, if you’re looking for a Chromebook with a larger display, the HP Pavilion 14 is pretty much the only game in town. If you’re just looking for a cheap Chrome OS laptop, the $200 Acer C7 Chromebook has the same processor, similar battery life, and even the same screen resolution (on a smaller, 11.6 inch display), for practically half the price.