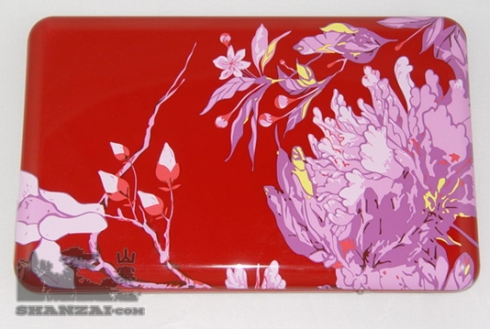 The HP Mini 1000 Vivienne Tam Edition netbook was one of the most expensive netbooks on the market when it was launched late last year. The $700 price tag netted you a thin and light netbook with a 10 inch screen. But the real selling point was the red color and floral pattern on the lid courtesy of designer Vivienne Tam.

Now that HP is phasing out the Mini 1000, the Vivienne Tam Edition may be something of a collector’s edition. So I’m not exactly surprised to see that there’s a cheap Chinese knockoff out there. The only thing that surprises me is that it took this long for someone to create a fake version of this netbook.

The clone was built by Qifang Electronics, and looks an awful lot like the original. The main differences are the fact that the knockoff has a 2.5 inch hard drive instead of a 1.8 inch HDD, and the clone costs about $300, or less than half the MSRP of the original.

To be honest, the colors on the Qifang version also seem a bit less vibrant to me. It looks almost like a decal instead of a painting. But this might just be a bad photo.