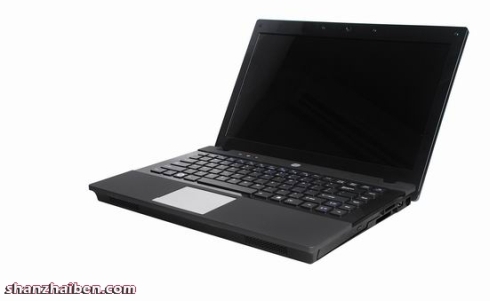 The HP Mini 5103 may seem like the netbook that has it all — an all-metal case, 7200RPM hard drive, optional HD and touchscreen displays, an optional dual core CPU, hard drive sensor to prevent damage, and even a battery indicator built right into the battery. But you know what it doesn’t have? NVIDIA ION graphics.

Fortunately there’s always a Chinese knockoff artist willing to step up to the plate. The folks at Shanzhaiben have found a notebook that copies the basic design of the HP Mini 5103, but which replaces the Atom N455/N550 processor with a dual core 1.83GHz Intel Atom D525 chip. The knockoff also has an NVIDIA ION graphics processor. Oh yeah, it also has a DVD-RW drive.

If you’re wondering how the manufacturer made room for a disc drive — something that very few netbooks have, there’s an easy answer — this notebook may have netbook-like components, but it’s much larger than a typical netbook. I’m having a hard time getting all the details through Google Translate, but it looks like it has either an 11.6 inch, or a 14 inch display.

The notebook also has VGA and HDMI ports, a 1366 x 768 pixel display, and the usual array of USB ports and mic and headphone jacks.

Thanks to the larger display, it might be more fair to say that the notebook is an HP Elitebook knockoff rather than an HP Mini 5103, but design-wise, it really does seem to take most of its cues from the HP Mini 510x series.