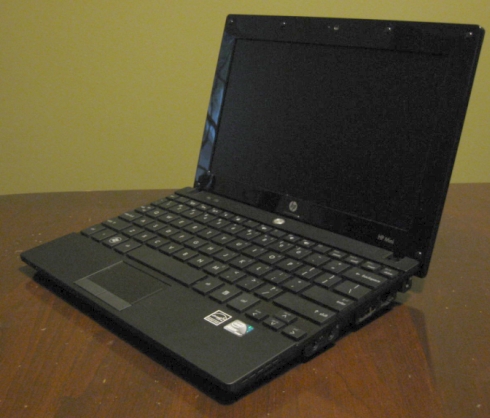 The HP Mini 5101 is a business class netbook with premium features. While that might sound silly, there’s no better way to describe the HP Mini 5101, which has a number of characteristics that set it apart from the crowd. Sure, it has a 10 inch screen and Intel Atom processor just like virtually every other netbook on the market. But it also has a 7200rpm hard drive, a 2MP webcam, a magnesium alloy chassis, and an accelerometer that shuts off the hard drive to prevent damage in the event of a fall.

But while the HP Mini 5101 has a premium set of features, it doesn’t cost much more than a typical netbook. Prices start at about $399.

The thinking behind the HP Mini 5101 wasn’t to give a cheap netbook premium features. Rather, HP basically started with a ProBook style notebook and made it smaller and lighter. Along the way, the company did cram a low resolution display and Intel Atom processor in the netbook. But it really does look like a professional machine thanks to the magnesium alloy case, the large keyboard, and overall no-nonsense style. 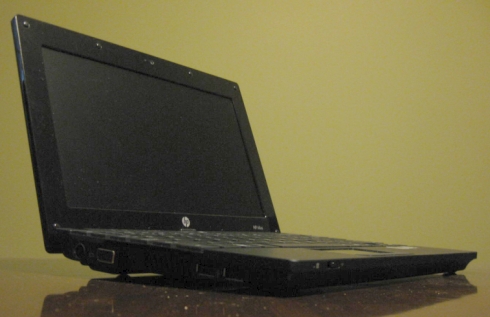 On the front of the laptop you’ll find a wireless switch, and around the sides there are 3 USB ports, an Ethernet jack, mic and headphone jacks, and a VGA port. There’s also an SD card slot.

Above the keyboard is the power button which glows a light blue color when the computer is powered up. It flashes when the PC is in sleep mode. There are also two quick-launch buttons, one fo a web browser and the other for your default email application. 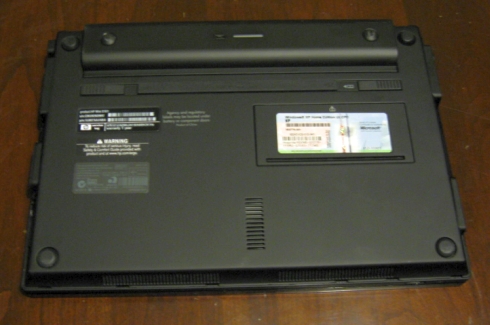 There’s a single memory slot and the computer can support up to 2GB of RAM, which means you’ll need to remove the 1GB stick that comes with the HP Mini 5101 and replace it with a higher capacity stick.

I asked the folks at HP what the thinking was behind this new easy-access approach, and I was told that the company received a fair number of complaints that it was too difficult to upgrade the memory on earlier models that required you to remove the keyboard to access the computer memory. So HP did a 180 with this model and made it incredibly easy to upgrade the memory. While you probably won’t actually need to open the RAM access panel very often, it’s a welcome improvement, and it should come in handy for corporate or education oriented clients that purchase dozens of these netbooks and want to upgrade them all to 2GB of RAM.

The  lid does show fingerprints, but it’s not nearly as glossy as most of the plastic-covered netbooks I’ve used to date.The bezel around the display, on the other hand, is a fingerprint magnet. 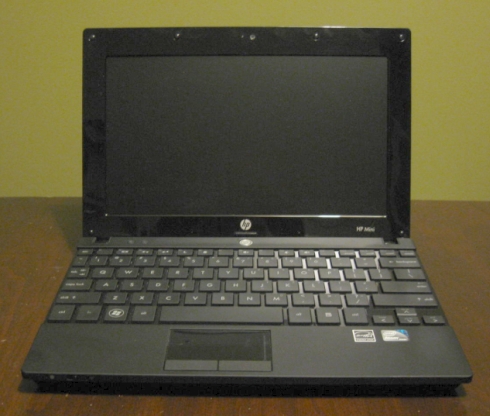 The HP Mini 5101 features a matte, non-reflect display, which is a rarity on netbooks these days. It’s not exactly easy to read outdoors, but it doesn’t turn into a mirror the second you bring the laptop into contact with sunlight.

The laptop also has an accelerometer which shuts down the hard drive when it detects that the computer is falling. This can help prevent data loss and other damage to the hard drive. If you’d rather not use this feature (which could become problematic, say, if you’re using the computer while on a bumpy bus trip), you can disable it using the HP Drive Guard utility. 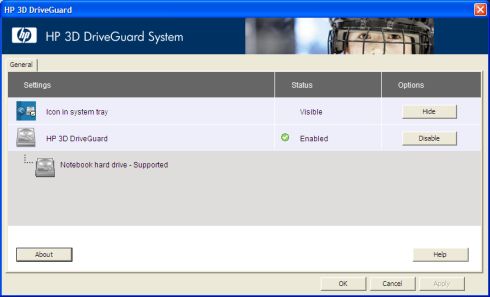 Overall I’m quite impressed with the build quality of the HP Mini 5101. My only complaint is that the netbook’s fan is relatively loud and the fan seems to be powered up more often than not in my experience. If you don’t expect to use the laptop in quiet places, that might not be a problem. But the HP Mini 501 does appear to be a bit noisier than some other mini-laptops I’ve used.

The HP Mini 5101 keyboard has HP’s DuraKey finish, which helps prevent the keys from wear and tear. The labels on some keyboards start to wear away after coming in contact with your fingers after a few years. HP says its DuraKey solution provides 50 times the protection.

The keyboard has an island-style layout, which is to say that the keys are flat and have a little space between one another. I find it comfortable to type on, and I appreciate the full sized shift keys on both the left and right sides. There’s no room for dedicated Home, End, or PgUp, PgDn keys, but you can trigger these actions by holding the Fn key while hitting the arrow keys. 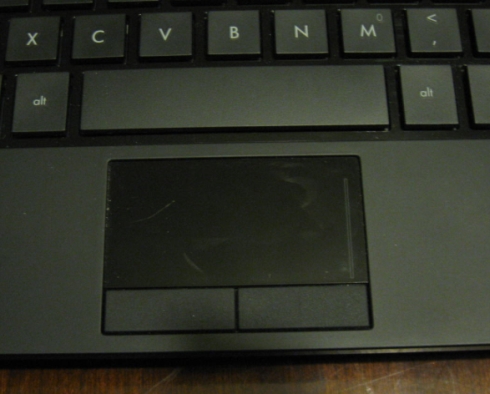 The touchpad is one of the best I’ve ever used on any laptop. It has a glassy texture which I thought would get old quickly, but it’s actually quite comfortable to use. There are two distinct buttons below the touchpad to register left and right clicks. I think part of the reason so many PC makers choose to use a single button with a rocker dial instead of two buttons is because it’s harder to make the two-button solution look attractive. But HP pulls it off with the Mini 5101.

While the HP Mini 5101 has the same 1.66GHz Intel Atom N280 CPU found in a number of other netbooks, it does have one feature that clearly helps boost performance: A speedy 7200rpm hard drive. Most netbooks have cheaper 5400rpm hard drives, and some have sluggish 4200rpm disks.

In practical terms, the HP Mini 5101 performs admirably at everyday computing tasks including surfing the web with multiple tabs open, watching 720p or lower resolution videos, and editing documents. The computer boots Windows XP in just 38 seconds, although it takes another few seconds to connect to my wireless network. Still, this is one of the fastest boot times I’ve seen on a Windows XP netbook.

I ran a few CPU-intensive tasks, and while the HP Mini 5101 isn’t going to compete with a high end laptop with a dual core processor, it’s certainly one of the fastest netbooks I’ve used.

I also used VirtualDub to transcode a 2 minute AVI file I shot with my digital camera to XViD. The HP Mini 5101 finished the task in 4 minutes and 2 seconds. It took 6 minutes and 8 seconds on the Eee PC 100H.

The HP Mini 5101 was able to use 7-Zip to create a ZIP file containing the contents of that folder in 4 minutes, 11 seconds, while it took the Toshiba NB205 6 minutes and 7 seconds.

The unit featured in this review has a 6 cell, 55WHr battery. I was able to get about 5.5 hours of run time with WiFi on and the display brightness set to about 40%. While there are a number of netbooks that get better battery life than this, 5 and a half hours isn’t bad.

HP also offers a 4 cell, 29WHr battery. If you don’t care about battery life, you can save about $25 by picking up a model with the lower capacity battery. But for most users, I’d say it’s well worth spending the money on the 55WHr battery. 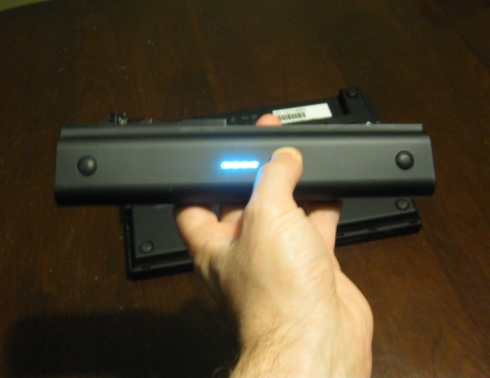 Another nice feature that you won’t find on most netbooks is a built-in battery gauge. You can press a button on the battery itself to see how much juice is left on LED built into the battery. This works even when the battery isn’t plugged into the laptop.

HP doesn’t load the Mini 5101 with too much bloatware. There are utilities for managing your wireless connection, programming the quick launch buttons, and enabling or disabling the DriveGuard utility.

The computer also comes with a handful of applications that you can choose to use or uninstall, including a 60 day free trial version of Microsoft Office. But if you don’t want to use Office, you can also use the full version of Corel Home Office that comes free with the computer. Corel Home Office includes a word processor, spreadsheet, and presentation applications. It can also open Office documents. 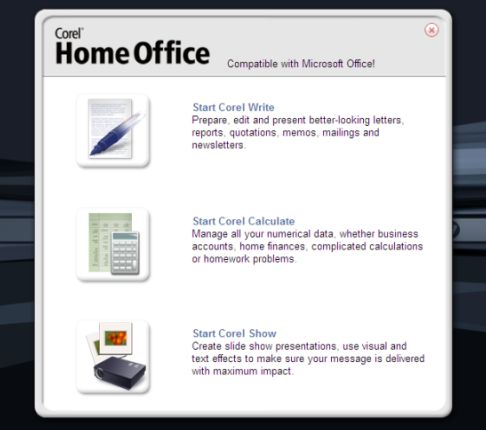 There’s also a PDF application called PDF complete. And for some reason HP also decided to include a Roxio Businss DVD creator even though the computer doesn’t include an optical disc drive. 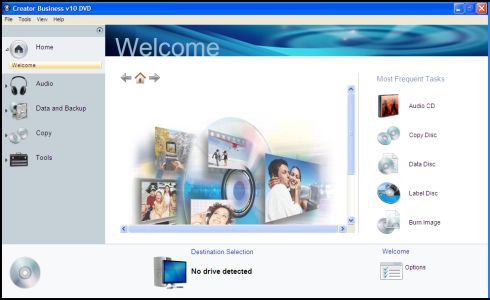 HP does sell an optional USB disc drive as a peripheral, so I guess there’s that.

Simply put, the HP Mini 5101 is one of the best netbooks I’ve used in nearly 2 years of covering mini-laptops. There are faster machines out there, but none with a 10 inch display and Intel Atom processor. And you could create your own PC with a speedier storage system buy replacing your netbook hard drive with a solid state disk. But that takes more money and technical know-how than purchasing an HP Mini 5101 with a 7200rpm hard drive for $400 to $425.

Speaking of price, here’s the one down side to the HP Mini 5101: It’s a business class machine, and that means HP is marketing it at enterprise customers. As such, you have only a few options when ordering the laptop from HP.com. You can choose a $400 model with a 4 cell battery, a $425 model with a 6 cell battery, or configure your own laptop. But once you choose to configure your own laptop, the starting price jumps to over $500, even if you select the model that ships with SUSE Linux rather than Windows XP.

And if you want the optional high resolution, 1366 x 768 pixel display you’ll have to choose to configure your own netbook, which means that even though the HD display is listed as a $25 upgrade, you’ll have to spend closer to $125 to get it. 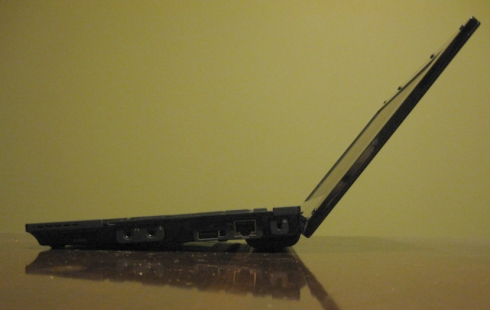 But that’s only if you order through HP.com. If you are an enterprise customer and you want some of the higher end options like the HD display you can contact your HP representative for enterprise pricing options.

Overall, if you’re willing to spend $425 on a netbook at a time when you can get a cheaper Intel Atom powered 10 inch laptop for closer to $300, HP does give you a number of reasons to upgrade including an excellent chassis, keyboard, and touchpad, a fast hard drive, high quality webcam, and little extras such as easy RAM upgrades and a battery gauge built into the battery.

You can read more about the HP Mini 5101 and discuss this netbook in the Liliputing Product Database.