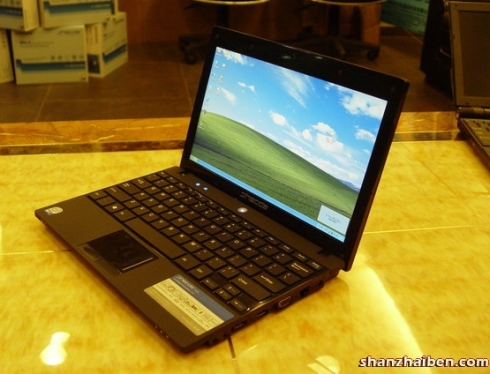 I could have sworn everything was supposed to be bigger in Texas, not China. But a cottage industry seems to have popped up around cloning Western netbooks and making them a little larger in China. Yesterday it was the 10 inch Dell Latitude 2100 that was blown up into an 11.1 inch model. Today’s it’s the HP Mini 5101’s turn.

Chinese PC maker Phecda is showing off an 11.6 inch laptop with a 1366 x 768 pixel display that looks an awful lot like the 10.1 inch HP Mini 5101. It has the same basic case design, a similar keyboard, and the touchpad looks virtually identical. Even the power button and LEDs look pretty much the same.

The Phecda is expected to sell for around $300 when it’s released in Shenzhen, China. While that’s about $100 less than the base price of an HP Mini 5101, you don’t get all the bells and whistles that come with the HP model.

The HP Mini 5101, on the other hand, has a 1.66GHz Intel Atom N280 CPU, 2MP webcam, a 7200rpm hard drive, and a high capacity 55WHr battery option (although the standard 28WHr battery is likely similar to the one that comes with the Phecda PC.).

The bottom o the Phecda laptop does look a little diferent. Instead of a small access panel for upgrading the RAM, there’s a large access panel which will likely make it easy to upgrade the hard drive and other components as well.