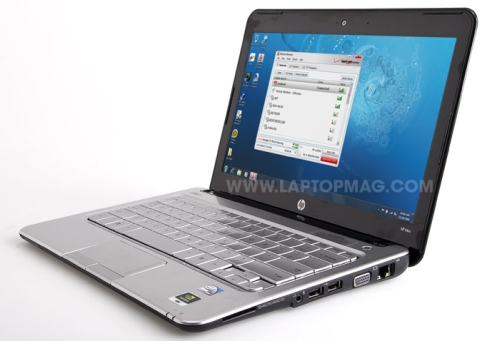 Verizon Wireless is now offering a subsidized HP Mini311. You can pick the laptop up for $199 when you sign up for a 2 year wireless broadband service plan. That will wind up setting you back $60/month for the next two years, but these plans can often be transferred to different devices if you decide you want a new netbook next year.

The model you get from Verizon has a few new tricks up its sleeve. Like the version of the HP Mini 311 released a few months ago, it has an 11.6 inch, 1366 x 768 pixel display, an Intel Atom processor, and NVIDIA ION LE graphics. But the Verizon model has 2GB of RAM, a built in 3G module and runs Windows 7 Home Premium. Those options are available from HP.com, but once you add them the $400 based price jumps up to a $600.

The folks at Laptop Magazine recently took the Verizon Wireless HP Mini 311 for a spin, and while they found it gets lower battery life than the Windows XP version, the new model also performs well with Windows 7, and still trounces every netbook with integrated graphics when it comes to graphics performance tests. When it came to video games, the laptop could handle World of Warcraft with ease, but struggled to pump out 10 frames per second with Far Cry 2 (which is way above the netbook average, but still not quite playable).

The down side is tht Windows 7 and the 3G modem both seem to take their toll on battery life. You’ll get less than 5 hours of run time on WiFi and just 3:45 on 3G. You can find more details at Laptop Magazine.