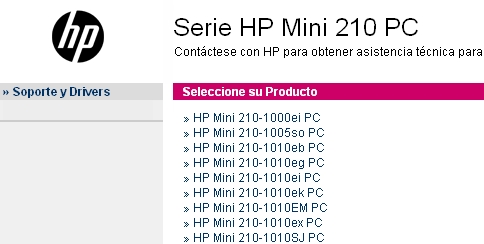 HP has yet to announce any product called the HP Mini 210. But a few months ago the model number was spotted in a system update file. Today, the folks at MyHPMini found a support page on HP Spain’s web site that lists more than 50 different configurations of an HP Mini 210.

There’s no actual information available, but given HP’s naming conventions, it’s probably safe to say that the HP Mini 210 is a netbook, and it represents a significant enough departure from the current HP Mini 110 to warrant a new model number.

Given that most PC makers are expected to launch netbooks with Intel’s upcoming Pineview processor on or around CES in January, I’d be surprised if the HP Mini 210 stuck with an Atom N270/N280 processor, but it’s not like Pineview and Diamondville are the only choices.

Update: Spanish site Area-Integral has a product listing for the HP Mini 210, which lists some specs including an Intel Atom N450 processor, 1GB of RAM, a 250GB hard drive, and Windows 7 Starter Edition.

4 replies on “HP Mini 210 makes another mysterious appearance at HP.com”