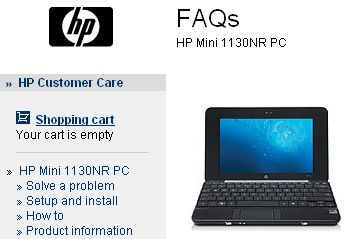 Update: It turns out the HP Mini 1100 is not a new model, but just a variation of the HP Mini 1000. And HP has confirmed that these models do not have ExpressCard slots.

Members of the MyHPMini forums have noticed several new netbook model numbers showing up on the HP support web site. Right now HP offers the HP Mini 1000 line of netbook and the HP 2100 series (which includes the original HP 2133 Mini-Note and the upcoming HP 2140 and 2150 models).

It’s not immediately clear what differentiates these netbooks from the HP Mini 1000 line. From the pictures, they look pretty similar. One member of the MyHPMini forums says he spoke with an HP sales agent in Canada who told him the new models feature ExpressCard slots for wireless modems or other devices. But I haven’t seen any further confirmation of that change yet.

Update: As Mikez points out in the comments below, HP has fleshed out the specs, and these models will indeed sport ExpressCard slots. Engadget has a list of links to the spec sheets fo reach model.