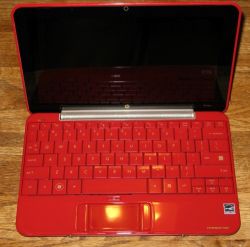 HP has been showing off the designer Vivienne Tam Edition of the HP Mini 1000 since before the company had even announed the HP Mini 1000. But up until now, the only photos I’d seen of the netbook were press shots or photos that journalists/bloggers took at press events. Now it looks like Judie at Gear Diary has gotten her hands on one and she plans to put it through the paces over the next week or so.

One reply on “HP Mini 1000 Vivienne Tam Edition in pictures”