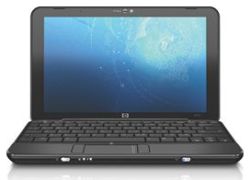 After a false start over the weekend, HP has finally gotten around to officially launching the HP Mini 1000. This machine is the second netbook from HP. It replaces the HP Mini 2133 Mini-Note, and in some respects the HP Mini 1000 is certainly an upgrade. In others, not so much.

While the new model has a faster CPU, it also lacks some of the polish that made the older version shine. On the bright side, HP seems to be cleaning out its stock of the HP 2133, which means you can pick some older models up for dirt cheap. For instance, Amazon has a Linux model for just $299

The Vivienne Tam edition will be available in December, and as I mentioned it comes with the larger display. But it also has a higher price tag of $699.

Possibly the most interesting model is the HP Mini 1000 with MIE, which will be available soon. It starts at $379, which isn’t much less than the Windows XP model. But it comes with a custom version of Ubuntu and an HP designed software interface that makes the Dell launcher for Ubuntu on the Inspiron Mini look like child’s play. You can check the interface out in the video below from Notebooks.com. And make sure to check out the detailed review of the HP Mini 1000 that Laptop Magazine is running with information on the battery life and performance.