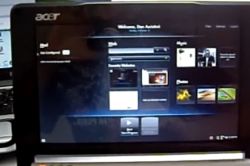 The HP Mini 1000 Mi Edition features a custom version of Ubuntu Linux designed for HP netbooks. But here’s a little secret: HP netbooks have many of the same components as mini-laptops from other companies. So you can install the Mi Edition software on most other netbooks and expect most things to work out of the box. What won’t work on most machines are things like WiFi or audio drivers.

But it turns out that if you install Mi Edition on an Acer Aspire One, the WiFi will work. In fact, the only thing that doesn’t work is audio.

Now, before you go trying this experiment, keep in mind that the HP Mini Mi Edition software installer will reformat your hard drive and wipe any existing operating systems and other data that are on your computer. So you’ll want to make sure you’ve got a restore disc or a plan B handy in case things go horribly wrong.

But I’ll let you in on a little secret. It is possible to modify the Mi Edition code to add support for officially unsupported systems like the Asus Eee PC. I know a guy who’s working on this and on creating a liveUSB version of Mi Edition that will let you test drive the OS without wiping your hard drive by running it from a USB flash drive. Hopefully the kinks will be worked out within the next few days and we’ll be able to publish step by step instructions for creating the liveUSB.