The HP Spectre laptop  is one of the thinnest notebooks I’ve ever seen, and it’s certainly the thinnest to be available with a Core i5 or Core i7 Skylake processor. Measuring just 10.4mm (0.41 inches) thick, this notebook with a 13.3 inch display is noticeably thinner than a MacBook Air, Samsung Notebook 9, Dell XPS 13, or LG Gram 13. 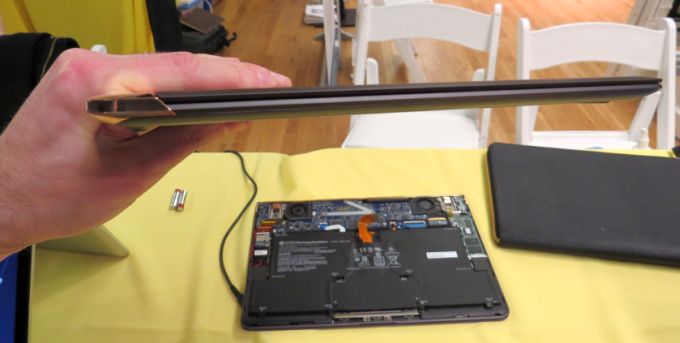 So how did HP do it? By redesigning some of the key features of the laptop. I already talked about some of those design choices when covering HP’s launch of the Spectre laptop earlier this week. But I just got a chance to spend some time with the laptop… and see what it looks like under the hood.

First up, HP used a hyperbaric cooling system instead of a traditional fan or heat sink. There are two vents on the bottom of the laptop and fans suck air up through them. Then air flows over the system board and out the vents in the back of the laptop.

Second, instead of a single flat battery, the HP Spectre’s 38 Whr battery is divided into four pieces: two “thick” ones and two thinner ones. 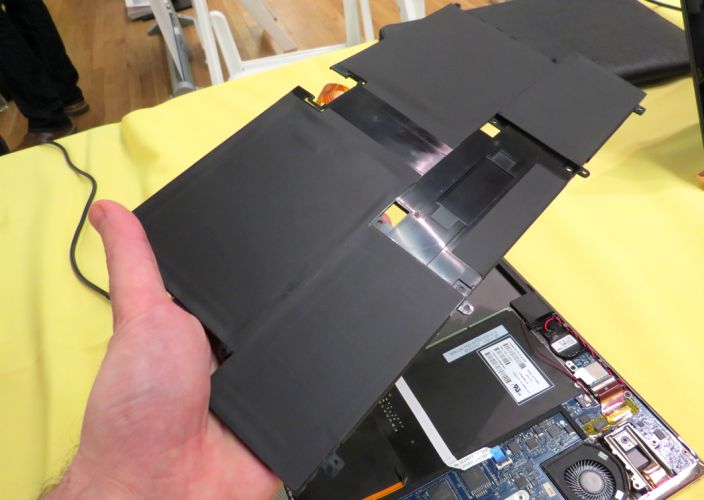 This allows HP to spread out the battery to all available space beneath the keyboard and to the sides of the touchpad. There’s no battery below the trackpad, because HP wanted to leave room for the touch mechanism (the laptop does not have a touchscreen display, so HP wanted to make sure it had a high quality touchpad).

Third, the hinge uses a piston-style mechanism, much like you would see in a kitchen cabinet. The piston retracts and expands when you open and close the laptop lid, allowing it to take up less space than a typical laptop hinge.

I did notice that the screen wobbles a bit if you tap it, so while the hinge does provide some friction, it’s probably for the best that HP decided not to include a touchscreen on this model. You probably won’t notice much shakiness if you’re just using the laptop on a tablet, desk, or lap.

HP is showing off the insides of its laptop to highlight the design elements of this super-thin machine. But the company does not consider the Spectre to be a user serviceable machine.

You can open up the case. Just remove the rubber strips from the bottom of the laptop and you’ll find a few screws. Take them off and you should be able to pry off the bottom cover.

Once you’re inside, you’ll find that the memory is soldered to the system board. Theoretically you should be able to replace the SSD. 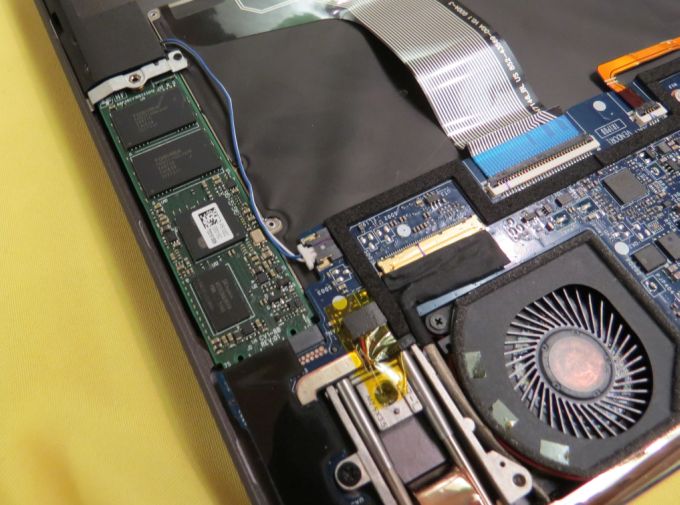 But since HP offers a 256GB and 512GB options, there probably won’t be much reason to do so unless you really need more storage or the SSD goes bad. And you’ll probably void your warranty if you damage the machine while working on the insides. Still, it’s nice to know you can open it if you’re brave enough to try. 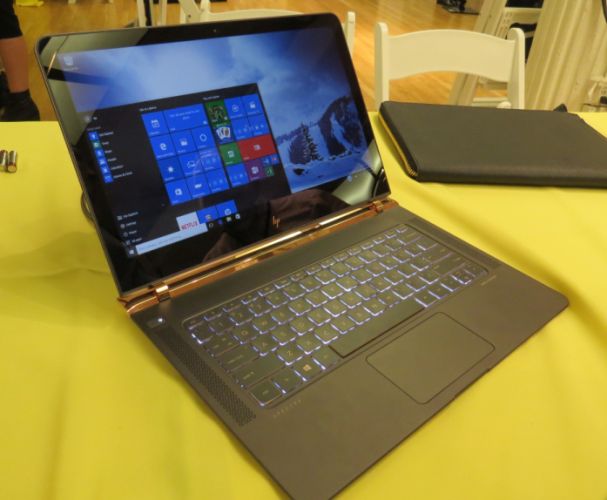 A few other things HP did to keep the laptop thin include using a keyboard with 1.3mm of travel (the company’s other ultrabooks use 1.5mm keys), and a display assembly that’s just 2mm thick.

The laptop goes up for pre-order April 25th, and it should be available in Best Buy stores in late May.