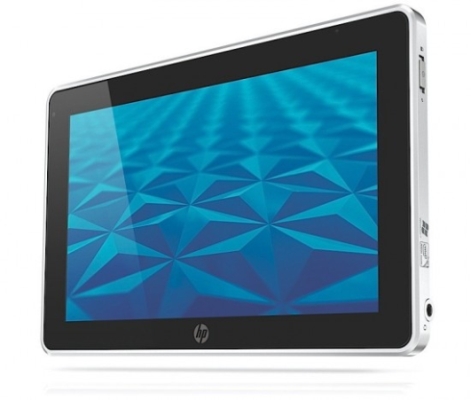 More than 10 months after an HP Slate PC was shown off on stage at CES in January, the company is finally ready to bring its Windows 7 Slate to market. It’s just not the consumer oriented iPad killer many people had been expecting. Instead, at $799, HP is positioning the HP Slate 500 as a business oriented tablet. The company will likely introduce a consumer level tablet running the mobile webOS operating system sometime next year.

So what does $799 buy you? The HP Slate has an 8.9 inch, 1024 x 600 pixel capacitive touchscreen display. It sports a 1.86GHz Intel Atom Z540 processor, 2GB of RAM and a 64GB solid state disk. There’s a 3MP camera on the back and a front-facing VGA camera for video calls. It has a Broadcom Crystal HD video accelerator which should help with high definition video playback (in case that sort of thing is important for a business class slate). There’s also an docking station with HDMI output. The tablet runs Windows 7 Professional. HP says you should get about 5 hours of run time out of the battery, which is not user replaceable.

OK, so aside from the Atom Z540 processor, the specs don’t seem all that unusual. The Tega v2 and CTL 2goPad SL10 are similarly equipped. But there’s are a few things that really  does set the HP Slate 500 apart: It has a N-trig active digitizer, which should make it much easier to interact with the tablet using a stylus, and which should make handwriting recognition a breeze.

The tablet also weighs just 1.5 pounds, making it even lighter than the iPad. There’s a dedicated keyboard button on the side of the device, making it easy to launch and close the on-screen keyboard (which can be a bit of chore if you’re only relying on the Windows 7 tools).

While the $799 price tag might turn some people off, it looks like you really do get a lot for your money, including an SSD, active digitizer, stylus, docking station, Windows 7 Home Premium, and capacitive display. The only things that really worry me are the non-replaceable battery and the relatively slow Atom Z540 processor.

You can check out a promo video and a hands-on video after the break, courtesy of Engadget. SlashGear also has some excellent videos, as does GottaBeMobile (which points out that there doesn’t appear to be palm rejection technology, which is a problem when you have a capacitive touchscreen and an active digitizer for pen input).

The tablet is available from HP for $799 and up.