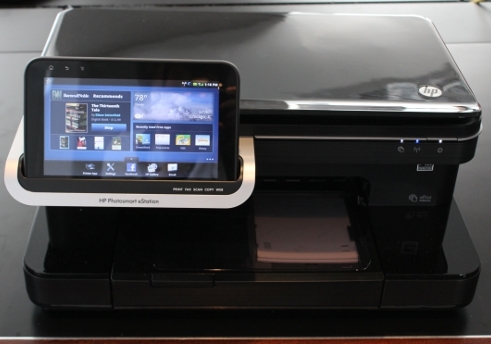 Think the $499 that Apple charges for its WiFi-only iPad is a bit too much to pay for a tablet computer? No problem. HP has just introduced a $399 Android tablet… oh yeah, and it comes with a free internet-connected printer.

Actually, the Photosmart eStation (or the device formerly known as the HP Zeen) is first and foremost a $399 printer, which just happens to have a 7 inch Android tablet that you can use to interact with the printer controls, surf the web, or perform other activities. The tablet is also removable, so you can use it around the house to check your email, surf the web, or look at photos — all of which you can also send straight to the printer.

HP says the tablet, which has a Freescale i.MX51 CPU will run for between 4 and 6 hours on a charge. When it’s docked to the printer, it can function as a digital photo frame.

The tablet runs Android 2.1 and has a few important apps built in, including Facebook, Email, and weather apps. But it doesn’t include access to the Google Android Market for downloading and installing third party apps.

I’m not sure how hard it would be to install apps manually, but HP has hand-selected a bunch of apps that will work well with the device — and with the printer. It looks like HP also designed a custom user interface which runs on top of Google Android. There is a music player, which is one of the only apps that’s not directly tied to the printer.

The folks at Laptop Magazine got to spend some time with a pre-release Photosmart eStation, and you can check out their hands-on video after the break.