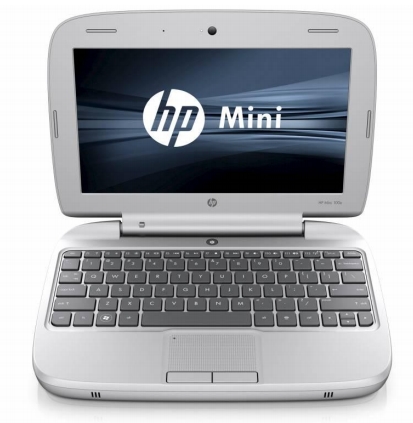 HP is introducing a new model into its Mini line of netbooks with the launch of the HP Mini 100e Education Edition netbook. This is the first product aimed at students between kindergarten and 6th grade.

The netbook is designed with a strong plastic chassis with steel pins, a spill-resistant keyboard (with mylar film under the keys), and an LED on the back of the lid so that teachers can see when there’s network activity. The mini-laptop also has a carrying handle, and an intergrated modem for use in developing areas or remote areas where broadband might not be available. The handle is non-user removable, because HP wanted as few removable parts as possible to keep children from tampering with the netbook. For that reason, the RAM and hard drive are not easily accessible either.

The back panel is customizable, allowing schools or governments to customize their netbook orders. Customers can also add patterns or colors to the keyboard or other case elements.

The HP Mini 100e will come with Microsoft Office 2010 Starter and Microsoft Math.

HP plans to offer the HP Mini 110e with a starting price of under $300 for a model with Windows 7 Starter Edition. It’s expected to go on sale globally the first week in July. 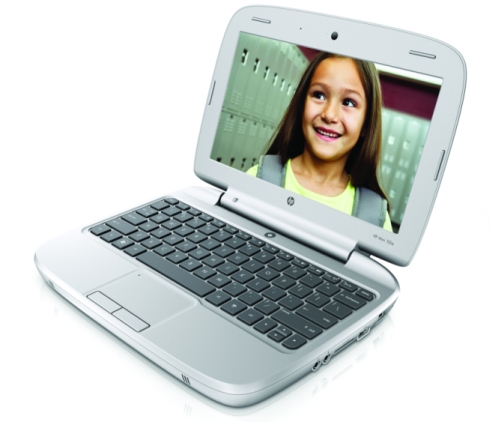 While the HP Mini 110e bears a more than passing resemblance to the Intel Classmate PC reference design, HP actually designed this laptop in-house. It includes many similar features, but that’s to be expected when you’re trying to develop a semi-rugged machine for educational purposes. HP also points out that the sub-$300 price is substantially lower than the $399 starting price for most Classmate PC-based systems.

Interestingly, a pre-release version of this netbook was on view at Computex earlier this month at the Novell booth. At the time, I assuemd it was a Classmate PC, but looking closer, it becomes clear that the design is similar but not identical to computers based on Intel’s reference design.