The era of true Chrome OS tablets is here. Last month Acer unveiled the $329 Chromebook Tab 10 designed for the education market. Now HP is launching a 2-in-1 tablet with a detachable keyboard and more powerful hardware.

It’s called the HP Chromebook x2 12 and it’s basically what Google’s Pixelbook would look like if it had slightly less impressive specs and a detachable keyboard instead of a 360-degree hinge.

The HP Chromebook x2 12 will be available from HP.com and Best Buy starting June 10th for $600 and up. 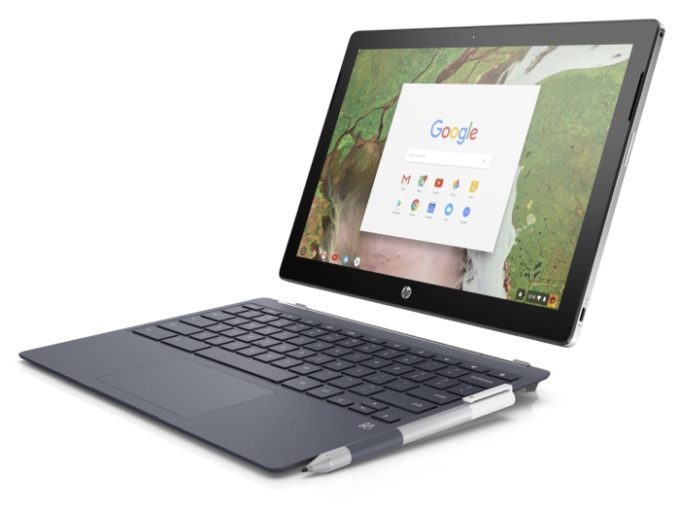 It comes with a detachable island-style keyboard and an HP Active Pen for pressure-sensitive input. There’s a removable loop on the side of the keyboard where you can store the pen when you’re not using it. And the keyboard has a hinge that lets you adjust the display angle, making the experience of using the x2 in laptop mode a bit more, well, laptop-like than you get with magnetic keyboard covers like the Microsoft Surface line of keyboards.

The display is also reversible: you can lift the screen off the keyboard, flip it around so it’s facing away from the keyboard, and then attach it again to use the keyboard like a stand rather than an input method.

HP put a 13MP camera on the back of the tablet and a 5MP camera on the front. There are stereo speakers and dual microphones. And the system has two USB 3.0 Type-C ports (one on each side of the tablet), a headset jack, and a microSD card slot for up to 256GB of removable storage.

The tablet alone weighs about 1.6 pounds, while the combined tablet and keyboard create a 3.1 pound laptop.

While the tablet/notebook doesn’t have a dedicated display output, HP will sell optional accessories including USB Type-C to HDMI or VGA adapters, as well as a USB Type-C to Type-A adapter.