Hewlett Packard appears to have its first Chromebook waiting in the wings. The Verge spotted a spec sheet on HP’s shopping site for an unannounced HP Pavilion Chromebook 14. It also happens to be the first Chromebook from any company to feature a 14 inch display.

Unfortunately it has the same 1366 x 768 pixel screen resolution you find on most HP Pavilion laptops. 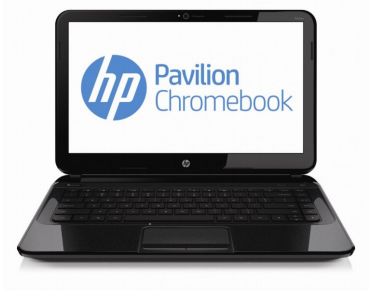 Just like other Chromebooks, the HP Pavilion model is basically a portable notebook which runs Google Chrome OS instead of Windows software. That means it boots, sleeps, and shuts down quickly, doesn’t need a lot of space for local storage, and stores most of your data online — so if something happens to your Chromebook, you can pick up where you left off just by logging into another machine.

The HP Pavilion Chromebook 14 features a 1.1 GHz Intel Celeron 847 processor, 2GB of memory (with support for up to 4GB), and has a 16 GB solid state disk.

The laptop is a bit larger than Chromebooks from Acer and Samsung, measuring 13.7″ x 9.4″ x 0.8″ and weighing nearly 4 pounds. But it’s still relatively small by traditional laptop standards. That’s not surprising, since the Pavilion Chromebook appears to be what you get if you basically replace the hard disk and processor in a traditional HP ultrabook or sleekbook and install Chrome instead of Windows.

The laptop has a 37Whr battery, for up to about 4 hours, 15 minutes of run time.

There’s no word on how much HP plans to charge for the Pavilion Chromebook or when it will be available for purchase. But since it looks like HP is taking a play out of Acer’s book, and essentially retooling its existing laptops to run Chrome OS rather than building something new from the ground up, I suspect the HP Pavilion Chromebook 14 won’t cost HP very much to produce.

At this point it looks like Acer, HP, Lenovo, and Samsung are all getting into the Chromebook business with Google. I wonder how long it will be until we start to see Asus, Dell, Sony, and other PC makers hop on board.