Most of HP’s current laptops, tablets, and even smartphones run Windows software. But the company also has a few Chromebooks, and soon HP may also launch a laptop that runs Android… or rather, Remix OS, which is a version of Android designed to look at home on a laptop.

Notebook Italia got a look at a pre-production version of HP’s Remix OS notebook at the Hong Kong Global Sources Fair this week, and it looks like Remix OS may be just one of the possibilities.

Update: Notebook Italia says its article has been “unpublished on request by Rockchip.” It’s unclear if that means there’s anything inaccurate in the article — but I get the feeling the company wasn’t supposed to make it quite so clear that we’re looking at an HP product without HP branding. 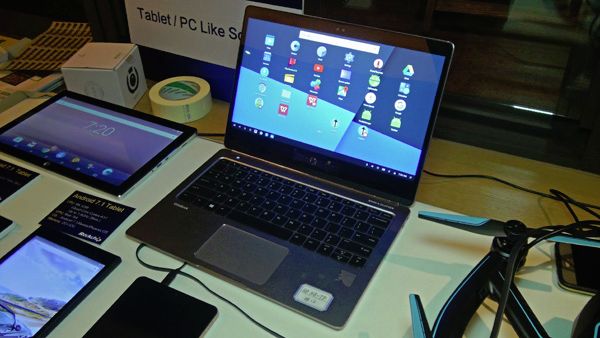 The notebook was on display at the Rockchip booth, where the chip maker is showing off a number of new products sporting its ARM-based processors.

The laptop has HP EliteBook branding and it’s a thin and light notebook that’s currently running Remix OS, although a product description card suggests it could also be equipped with Phoenix OS (which is similar to Remix OS) or Chrome OS (which would make this a Chromebook).

It’s probably worth noting that Rockchip isn’t using the name “HP” when describing the notebook, but it sure looks like an HP laptop, and a Rockchip representative does call it an “EliteBook” in the video below.

The laptop’s design seems similar to that of the $1000 HP EliteBook Folio, but it’s likely that a model with a Rockchip processor and Android or Chrome operating system would be substantially cheaper since there’s no need to pay for a Windows license and Rockchip processors tend to be much more affordable than Intel chips.

Rockchip says the new laptop should be available soon with “a big brand’s name on it.”

It’s not clear if the Rockchip-powered EliteBook will be available globally or just in select markets. HP recently launched a YunOS Book with the Android-based Aliyun operating system, but that model is only available in China.