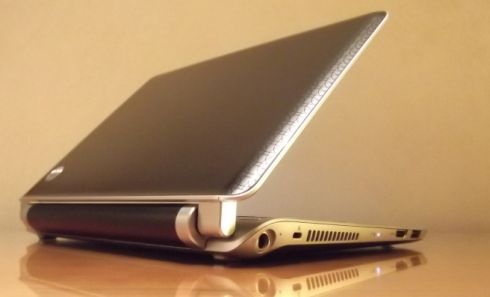 HP has introduced its first portable laptop based on AMD’s new Fusion technology. The HP Pavilion dm1z is a notebook with an 11.6 inch display which weighs about 3.5 pounds. It sports an 18W AMD E-350 (Zacate) processor with AMD Radeon HD6310 graphics, providing support for HD video, 3D graphics acceleration, and DirectX 11. The dm1z will be available starting January 9th for $449 and up.

In many ways the HP Pavilion dm1z is an updated version of the dm1 which HP introduced last year. But the new model has been tweaked in a number of ways. In addition to the new chipset, the laptop now has a 100% full sized keyboard (instead of 93%), a clickpad with a ridge near the clicking areas to make them easier to detect, and a base plate which is the same color as the lid — and which can be removed without any screws.

All you have to do is pop out the battery and then push a tab to remove the base and you can upgrade the RAM, hard drive, and other components. This works the same way on the HP Pavilion dm1z as it does on the HP Mini 210 netbook I reviewed recently, and in fact the Pavilion dm1z looks a lot like a larger version of the Mini 210.

But thanks to the larger screen size, this notebook has a full sized keyboard and a 1366 x 768 pixel HD display. It also has much more graphics and processing power, although HP says it still gets up to 9.5 hours of run time (with the WiFi turned off), and up to 10.5 hours if you customize the laptop with a solid state disk instead of hard drive. That’s with a 55WHr, 6 cell battery which comes standard with the laptop.

I should mention that HP told me the final model would have a silver colored battery instead of the black battery shown in the pictures below.