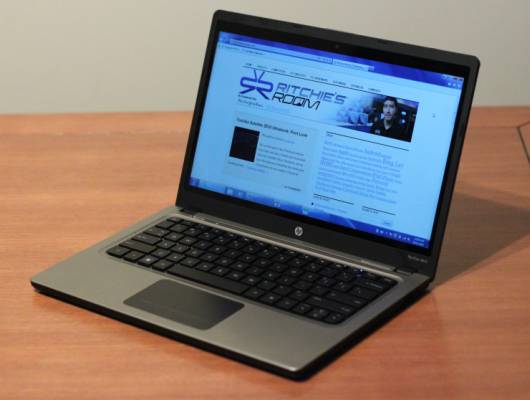 HP Australia has unveiled the company’s first ultrabook. According to the folks at Ritchie’s Room, the new thin and light laptop has a 13.3 inch display and it’s called the HP Folio.

An ultrabook is an ultraportable laptop that features the latest Intel Core i-series chips, has a speedy solid state disk, and measures less than 0.8 inches thick. Intel coined the word to define a new class of laptops, and the chip maker hopes that by the end of next year around 40 percent of all laptops sold will be ultrabooks.

The HP model will be available with a 1.4 GHz Core i3 processor or a 1.6 Ghz Core i5 processor. The laptop will come with 4GB of RAM and a 128GB solid state drive.

The lid of the laptop has a brushed metal finish, but the bottom has a rubberized plastic finish. The touchpad is a clickpad with the left and right buttons positioned on the same surface as the touch area. The laptop has a 1366 x 768 pixel display.

The HP Folio measures 12.5″ x 8.7″ x 0.7″  and weighs 3.3 pounds. That makes it the heaviest ultrabook I’ve heard of so far, but the laptop has enough space around the sides for a full-sized Ethernet jack, HDMI port, USB port, and SD card slot.

HP packed the Folio with a few features that help distinguish it from other ultraportable laptops such as the HP Pavilion dm1. In addition to the SSD and Intel chipset, the notebook has a backlit keyboard and Altec Lansing speakers.

The HP Folio should hit Australia in December. There’s no word on when we’ll see them in the US or how much they’ll cost.

You can find more photos and details about the HP Folio at Ritchie’s Room.